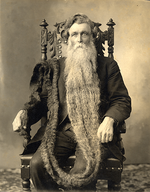 Portland, Oregon - A team of anthropologists from the University of Oregon have accidentally located what appears to be America's only fan of the Euro 2008 football tournament. Wildly popular in Europe and South America, soccer is virtually unknown in the United States, and scientists have long dismissed speculation that a mythical fan exits somewhere in the country. In fact, the expedition that discovered Larry Holton, the lone fan, originally had quite a different goal.

"We were actually looking for evidence of Bigfoot," explained lead researcher Gary Larsy, adding that until their discovery, there was far more evidence pointing to the existence of Sasquatch than to an American soccer enthusiast. When the anthropologists arrived in the forests of western Oregon, however, the locals had some unusual clues for them. They reported sightings of deflated soccer balls in the woods ,and sometimes people would hear a faint scream of "gooaaaaaal" from a distance. These descriptions were inconsistent with previous sightings of Bigfoot, but the team decided to investigate nevertheless.

After days of scouring the dense forests, on June 21st Mr. Larsy and his crew encountered a mysterious cabin. Initially they thought it was abandoned, but as they approached closer, they could see some flickering lights through a window. Peeking inside, Mr. Larsy saw a TV, unmistakably showing the Netherlands vs. Russia quarterfinals match. "It was shocking - I couldn't believe my eyes," the scientist said. What was even more astounding was that someone was actively watching that match. Upon cautiously entering the cabin, the anthropologists observed a bearded man with crooked teeth cheering wildly from his sofa. In fact, he was so entranced by the game that he didn't even notice his visitors until halftime.

During the brief halftime period the scientists were able to speak with the man and learn a few details about him. His name was Larry Holton, and a passport confirmed that he is in fact an American citizen, born and raised in the United States. At some point in his youth he ran away from home, built the log cabin, and settled in the woods. Mr. Larsy's team wasn't able to learn about how Mr. Holton became interested in European soccer, however, as the match's second half began and contact with the man was severed. The team plans to apply for additional funding to be able to return to the cabin and perform more detailed studies on this miracle of nature. The search for Bigfoot, meanwhile, will have to be postponed.