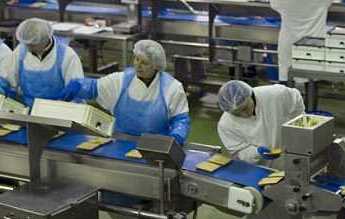 Hungarian sandwich makers hastily admitted into the U.K. love to dress in the national colors of the "old country."

LONDON, United Kingdom -- The greatest British food invention can now only be made by foreigners. The sturdy sandwich has gone the way of the British Empire, Rolls Royce, Harrods and Football and can now only be done non-natives. Hungarians are to be flown in to make ham and cheese sandwiches for lazy/busy Brits.

Running up a white flag, sandwich makers, Greencore Group confessed that they could find no one to make a decent sandwich in England and are now bringing in foreign labour to do it. The news sent the British pound lower and there was a run on white bread for people nostalgic of the olden days.

"We can't find anyone who can butter bread on the right side or make sure the ingredients don't fall out from the sides," admitted Greencore spokesperson Jack 'Cucumber' Blightonian. "We tried recruiting locally but no one applied. So we advertised in Hungary instead, as we thought that would make a pun." 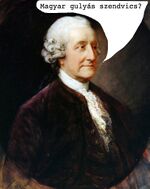 How the 4th Earl of Sandwich would have reacted.

The end of native sandwich-making in Britain means that one more thing that made the country how it is today has gone. Some blame the introduction of 'foreign muck' like McDonalds and Curry for the steep decline in making the perfect snack skills. Portraits of the 4th Earl of Sandwich have now been covered in black crepe to mark the passing of another fragment of Britain's fast crumbling food heritage.