UnNews:Anna Paquin: confused about her sexuality 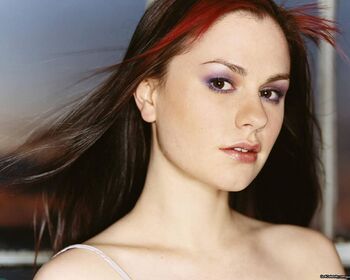 HOLLYWEIRD, HOLLYWOOD, CA – Despite being (a) married and (b) pregnant, actress Anna Paquin insists that she is “really, really, really—really and truly—bisexual.” Sexuality is not a “given” the actress claims, “but a choice, and, although I love Stephen enough to have married him and even be intimate with him, to a point, I choose not to limit myself sexually. I am—hear this, please!--bisexual.”

Her list elicited the quip from her husband, Stephen Moyer, who was with her during the interview in which she discussed these very special, personal, and intimate issues, “I'm confused!”

“That means you're not bi,” Paquin assured her husband.

He patted her abdomen. “So does this,” he joked.

In 2010, Paquin, seeking publicity for her flagging—some say, fagging—career, came out as “bisexual” in a video, Give a Damn, in which, condemning hate crimes, she encouraged voyeurs viewers to “hate the hate.” Other celebrity has-beens who appeared in the video to garner some free, much-needed publicity include Elton John, Cyndi Lauper, and Whoopi Goldberg, all of whom are homosexual, bisexual, or heterosexual. The video, Paquin says, was highly successful, creating “a media firestorm” that relaunched her foundering career. She expects that her announcement of her pregnancy will have the same effect. “That's what's good about being bi,” she says. “Publicity-wise, I can work both sides of the aisle.”

Other celebrities who have recently reported being pregnant include Sarah Jessica Parker, Alyson Hannigan, and Sarah Michelle Gellar. There is no word, yet, from their publicists whether they will also pretend to be gay or bisexual, as their careers, currently, are doing well without the need for them to “out” themselves.