UnNews:Ann Romney will indeed be 'moving Heaven and Earth' 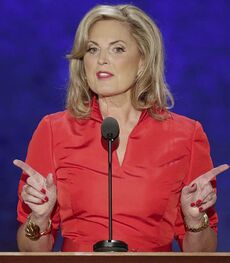 My Mittens knows which way to go when it comes to heavy lifting.

TAMPA BAY, Florida, USA -- After some initial confusion, the Republican party has confirmed that Ann Romney's speech at their convention about Mitt Romney "moving Heaven and Earth" to help the USA is to be understood literally.

Mrs Romney wowed the Republican faithful with a speech at the RNC which emoted the the reasons why her husband was the best man for the job of American President. She said he would be able to defy "Liberal science" and move the USA closer to Jesus with the power of impressive prayers.

"My husband is a good man with five fit sons I gave him," Mrs. Romney said. "Together, with my family we can all physically move our country closer to God with a good heave. Jesus's planet is not so far away and we can all go there as Christians from the past and today. So listen to me and go out and spread the message. Mitt can do it! Atlas Shrugged but Mitt will take up that globe and move the Earth to be closer to God and Kolob."

When news organisations asked if Ann Romney was really promising that her husband was going to re-locate Earth to somewhere else, a Republican spokesman confirmed that everyone there took things literally at the convention and there was no room for "atheistic blasphemers", "God Deniers" and "people with fake birth certificates".

"Heaven or Kolob, it all means the same place for those who are Truly Saved. Which evidently you are not."