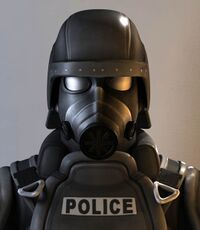 Students at the reincarnated Sandy Hook school will be protected from protracted shoot-outs and, above all, from disturbing dreams.

MONROE, Connecticut -- Students of the Sandy Hook school returned to classes in this neighboring town, as the government has spent an unprecedented amount of money to create surroundings so familiar that the students will not dwell on what happened there.

The Chalk Hill Middle School here has been renamed Sandy Hook and has been repainted in the old school's signature green color. The pupils' personal possessions have been gathered from the crime scene in an attempt to create familiar surroundings. To further this goal, each child will take the same seat as he had in the old school, and bean-bag mannequins will be placed at desks in lieu of the fallen classmates. To avoid confusion, these will have fabric X's where their eyes should be.

"We hope it will be a normal school day for the students," said Superintendent Janet Robinson, despite the armed policemen conducting pat-downs at each doorway. "Recent events have shaken each of us to the core. So we are not going to think about them." To ensure that the first-graders do not dwell on the gunplay, each child will have one Federal Grief Counselor over each shoulder, with helmets, sidearms, and reassuring Homeland Security flak jackets.

Monroe Police Chief Kevin White has stated: "This has to be the safest school in America." In addition to being a Gun-Free Zone, which the old Sandy Hook school also was, in the opinion of everyone but the shooter, the new Sandy Hook has been declared a Thinking-About-Guns-Free Zone. Any pupil who points at a classmate as though pretending to shoot, exclaims "Bang!" or perhaps clenches his fist, will be hauled off to Detention.

Plans for the old school, where the shooting took place, are not yet final. Some want it to be converted to a Gun Massacres Museum. Some believe that, as with gas stations where chili dogs are spilled on the dirt, it should be completely demolished and turned into a Superfund site for a decade until there is no trace of anything anywhere. The only thing these voters agree on is that the building is now ruined for any useful purpose.