UnNews:America relies on savers to master the perfect storm 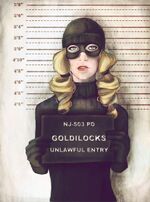 Goldilocks is set to join the U.S. Council of Economic Advisors.

NEW YORK CITY -- U.S. financial experts said that Americans' savings will be the key to the recession that is not imminent.

Americans are flush with "Coronavirus stimulus" cash, after years of getting checks from the government and not being able to spend them because state governors ruled that everything they wanted was "non-essential" and they should stay in their basements instead, wearing at least two face masks.

Jamie Dimon, chief executive of JPMorgan Chase, told an investor conference on Wednesday that they will spend that $2 trillion "at very strong numbers," meaning no recession right before next November's election. He gave his remarks with only brief, admiring glances at his $50 million quarterly bonus check from the bank. The tab at the cash bar ate up half of that, but he put it on his credit card.

Earlier in the week, Treasury Secretary Janet Yellen, in a teary confession before the Joint Economic Committee of Congress, said she was wrong to predict that inflation would be "transitory" and we would be stuck with it for another year or two before prices return to their levels before the multiple crises occurred that were not the fault of her boss, President Joe Biden.

Larry Summers, Yellen's predecessor under President Barack Obama, said the solution was for the Federal Reserve to jack up interest rates to stop the inflation, with the same fervor that it held them down under Presidents Bush, Obama, and Donald Trump to goose the economy and make the nation feel good enough to re-elect complete dopes. Summers said the resulting pain would hardly be felt by Americans with the current amount of cash in their pockets.

Despite his positive remarks, Dimon characterized the economic outlook as "a hurricane." As for policy recommendations, he recommended that the nation trust in Goldilocks (pictured).