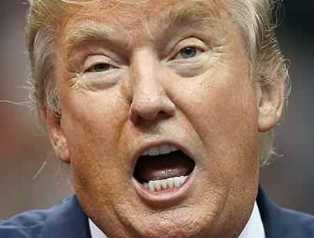 Mr. Trump disparaged the magazine's criticism. "I could gun down pedestrians in Times Square and they would still love me," he said, though the veracity of this statement could not be tested.

NASHUA, New Hampshire -- Every conservative in America has written that Presidential candidate Donald Trump is not one.

Writing in the magazine National Review, the opinion leaders say Mr. Trump is mislabeled and should call himself something else, preferably "ex-candidate." The essays were the cover story of an issue whose cover featured a photo of the Grim Reaper, labeled as Mr. Trump. The essays said Mr. Trump was an "opportunist" and a "huckster" and a "menace to American conservatism," drawing a direct contrast to statesmen such as John Boehner, Paul Ryan, and Mitch McConnell.

Mr. Trump seeks the Republican nomination to run against Hillary Clinton, the "progressive" who cannot say how that is different from a socialist, and who is flaming out to Bernie Sanders, a "socialist" who is really a Communist, to see who will replace President Obama, a "transformational President who will help the poor." The magazine implied that truly conservative voters should reject Mr. Trump in favor of, say, Jeb Bush.

Mr. Trump quipped, "Aw, that magazine is washed up. Its run is over. No one reads it anymore," after everyone read it and asked him for a comment. Along with the influential Manchester, N.H. Union Leader, which miffed Mr. Trump by endorsing Chris Christie as "the jerk this nation needs right now," Mr. Trump's witty retort puts him at odds with every print medium, every broadcast medium, and every competitor whose help he will need if nominated; also every foreign country. The magazine asked the President of Mexico, who has already received a bill from Mr. Trump for the border wall, to write a piece, but it was frankly unreadable, as though written in some foreign language.

Mr. Trump replied to his detractors, "I'll do it all myself. You'll see. It'll be great. I can't describe how great it will be. I've done it before. Many times."

The epidemic mislabeling of political candidates would be a gigantic opening for the No Labels movement. This campaign is not mislabeled but mis-unlabeled, being Michael Bloomberg's self-promotion vehicle to seat himself and tell the nation how large a Coca-Cola it can order.

In nearby Concord, the state Libertarian Party, sensing a rare opportunity, held its nominating convention and announced that it would place on the ballot a single candidate: a "moderate" for U.S. Senate who supports single-payer health care.