UnNews:Amazon builds its own navy 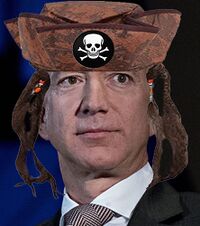 Pacific Ocean--Amazon owner Jeff Bezos has announced his plans to build his own fleet to "protect my interests" around the world. The move would make Amazon one of the most powerful organizations in the world, outside the USA and China.

The decision to create his own navy has been one of Bezos's long-term ambitions. He is a great admirer of the East India Company, which at one time had its own navy and army and monopolized trade from India. Bezos says him having his own armed forces would "save American tax dollars," as well as speed up delivery for "Prime" customers.

"All businesses have plans to expand their company," said Bezos. "I am no different except we can afford to protect ourselves from the Apple armada, Facebook flotillas, Google guerillas, and Microsoft marines. I don't see that what I am doing is remotely controversial. I have the money and I can afford anything." 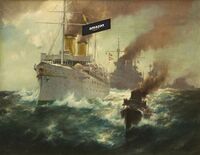 An impression of the Amazon Seven Seas fleet in action.

Ships have been ordered and Bezos has promoted himself to "Sovereign Admiral" of his own navy. Where exactly they will be based is not known, though he has been in the market to buy a bankrupt country and convert it into an armed Amazon state. Bezos's flagship will be a yacht to be called Armoured Amazon One.