OAKLAND, California -- Eccentric Oakland Raiders owner Al Davis took his organization in a bold new step this morning with an early splash in the free agent market. Davis signed quarterback Shane Falco, a character from the 2000 sports film "The Replacements." In the film, Shane Falco is portrayed by star of stage and screen Keanu Reeves, who as Falco guided his ragtag team of strike scabs to several emotional wins in an NFL-like professional football league. He appeared destined for retirement after the film's final game, set almost ten years ago in a fictional league of fictional characters. 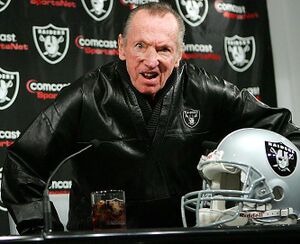 "Shane's got a live wire in him. I like that. Kid's got some spunk, and god knows a team can never have enough quarterbacks. Let's see if he's fully bounced back from that Sugar Bowl loss yet," Al Davis quipped after the press conference announcing the signing. "I fully expect Shane to beat out JaMarcus, Shane Lechler, and Kenny Stabler for the starting role, after I convince Art Shell to give him the majority of the snaps. Anyone seen Art lately? Where is that guy?"

"I don't care. I mean, not that I ever did, but I really don't care this time. I'm okay with the bench again. I couldn't care less," current Raiders quarterback/punchline JaMarcus Russell groaned when informed of the transaction. "This Falco guy can't be worse than me, I mean come on guys. Where's he from, Washington? They got a team now? By the way, what's a quarterback?"

Actor Keanu Reeves has contacted coach Tom Cable and informed him that in his present condition, he will not be reporting to training camp, and admitted to be slightly confused of the events that unfolded, and questioned whether or not Al Davis was aware that what he was watching on TBS the night before wasn't a NFL Films production.