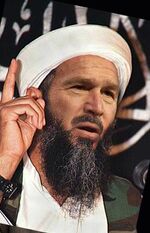 Al-Qaeda leader Osama bin Laden, in a scene from the video released today.

TORONTO, Ontario — UnNews has obtained a new video today of Al-Qaeda leader Osama bin Laden in which he claims responsibility for a suicide raccoon attack that left thousands without electricity in Halifax, Nova Scotia, Canada Thursday.

The video, which both the CIA and the Canadian Security Intelligence Service (CSIS) have confirmed as being authentic, features the terrorist leader boasting about the newest weapon at his disposal: trained animals that are not afraid to die.

The future of terrorism?

The incident in Halifax was the first attack of its kind, involving a trained raccoon being sent into the Dunbrack substation, where it chewed through the electrical wires, creating a massive short. The ensuing fireball killed the raccoon while heavily damaging one of the transformers.

This single incident left almost 10,000 people in the neighbourhoods of Clayton Park, Fairview, and Rockingham without power, most for 14 hours or more.

Bin Laden said that this event was but a foreshadowing of what is to come.

"This is only the first offensive, no more than a test run," bin Laden said in his videotaped statement. "Already in our training camps in Waziristan, we are training a vast new furry army to take part in our glorious jihad." He added, "Each animal has been promised 30 Virgins in paradise! We will own!"

Bin Laden also reiterated the fact that this destructive attack involved only a single animal. He warned that he has many more raccoons at his disposal, in addition to notable numbers of squirrels, chipmunks, and opossums. Flying squirrels are rumored to be in training for aerial suicide missions.

"If one raccoon can cause this much damage, imagine the possibilities with over one thousand," bin Laden said.