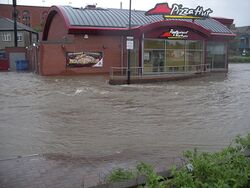 Thousands mourn as a Pizza Hut is flooded (Derbyshire).

In a surprise move, the countries of Indonesia, Thailand, Ethiopia and Zimbabwe have offered to assist the UK in a rebuilding operation following the devastating floods that hit the Midlands, Yorkshire and Worcestershire areas last month.

"We were so grateful for the money sent to us from the Western Countries after the 2004 tsunami that we just want to give something back," said Susilo Bambang Yudhoyono, President of Indonesia. "We want to help in the reconstruction of these people's homes and lives".

Greasy Irishman, Bob Geldof has also jumped on the bandwagon, saying "the Eastern countries need to give the UK as much aid as possible, because these people can't help themselves". He also added that Zimbabwe was organising a 'Live Aid'esque fundraising event (with the help of, among others, Sting and Madonna) to raise enough money to "Make Flooding History".

Ethiopia has said that it will be sending billions of pounds worth of medicines and vaccines to the UK to stop the spread of disease in the affected areas.

British Prime Minister Golden Brown, in a recent press conference, has said that the UK "would welcome any foreign aid to help us in our time of need", concluding with the warning that "it may not be enough".

The atrocity itself, as reported by Wikipedia