"Awww, look at how cute he is,'" exclaim onlookers[edit] 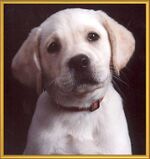 WASHINGTON D.C.: At roughly 2:30 P.M. earlier today, a young dog by the name of Mr. Snuggles officially announced his run for presidency.

"Mr. Snuggles, while acknowledging that an entry this late may be unusual," said the release explaining this declaration, "wishes to advertise his services as President under an independent party. He believes that he provides exactly the sort of friendly face that one needs in order to assist with difficult foreign policy jobs, as well as a nice, soft tummy to rub."

Already, Mr. Snuggles has begun to build up a devoted fan base across the country, many of whom were previously on the fence about who their vote was going to. "I just couldn't make up my mind between the candidates," said Mrs. Joyce Robinson, age 31. "Obama seemed like he was inexperienced, and McCain seemed just like more of the same. Mr. Snuggles is the right choice for America, by far."

In order to combat this adorable new candidate, Obama and McCain were quick to release attack ads slamming the pup. "Mr. Snuggles isn't even properly housetrained yet," said McCain in his nationally televised ad. "Do you really want a leader who will continually soil the Oval Office? Vote McCain, and I will ensure that the Oval Office remains clean, no matter what."

In response, Mr. Snuggles cuddled up with a kitten in a manner that has been described as "just the cutest darn thing you'll ever see."