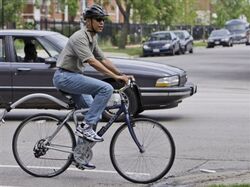 So there I was at the Barack Obama rally, doing my Solid Snake thing with the loose Democrat women, right? So Obama was talking, women were fainting, deer were coming out of the woods to nuzzle against him, people's ancestors were coming back from the dead. It's about what I expected, really.

And this hippie girl came up to me, all musky and greasy, and I had this little baggie in my pocket, and I was like literally ten seconds from sealing the deal.

But then Obama finishes his speech, and a choir somewhere starts singing, and she can't hear my proposition, and then Obama gets off the dais and comes over to me like he's going to shake my hand. But you know what he did instead?

He stole my bike!

I shit you not. He faked right, pushed me down, got on my bike, and started pedaling away. I got up and started to chase him, but some beefy guys in black suits and sunglasses pinned me to the ground. I barely got away with a major sinistral external abrasion and a severed brachialis radial.

And then Obama does a wheelie, turns around, looks down at me, and says "What America needs right now is change. And I'm changing the ownership of your bike, bitch." Then he spits on me.

I couldn't believe it. Well, you know what, Barack? You just lost my vote. This year, I'm voting for a third-party candidate.