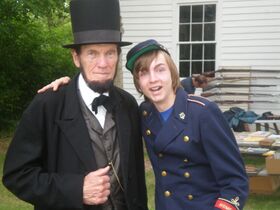 Lincoln was always considered a somewhat social man, but in recent weeks has been taking it to a whole new level

WAUKESHA, Wisconsin-- In recent weeks, an alarming number of sightings of the thought to be deceased president, Abraham Lincoln, have surfaced. Also, a common theme to these sightings are that the president who got us through the Civil War reportedly 'won't go home'.

Observers are claiming that 'small town fairs and little gatherings', and similar things of that nature, are hot spots for the ex-president. He also allegedly finds great joy in posing with disbelieving spectators, and giving them pennies as souvinirs.

"Yeah, I mean, I saw him at this little Civil War reenactment, and I thought that was kind of neat. You know, because he belongs there...even though I would have initially assume he might have better things to do." explained a witness. "Then, about a week later, I saw him at a small village festival just sitting on a chair. Literally just sitting, like he was expecting people to come over to him and interact. That kind of bugged me, because you would think that as the most respected man in American history, he might spend time on other stuff. Plus, I was under the impression he has been dead for over a 130 years. It just doesn't make sense for me. Plus, was he even invited? I think not. Sure, I still love the guy, but if I had been an official at this festival, I would have sent him packing, and told him 'go home, Abe!" Because honestly, it's gotten to the point that I see him so much I just kind of expect it, and he doesn't seem to have a home to go to anymore."

Strangly enough, Father Abraham seems to have found peace in the northern state of Wisconsin, attending anything he sees fit for a day filled with sitting on a chair and taking pictures now and then.

It has been widely accepted that Abraham Lincoln, the man who abolished slavery, was murdered by John Wilkes Boothe in the 1860's, but with the recent spike in Lincoln sightings, some extremists and UFOlogists are doubting this theory. 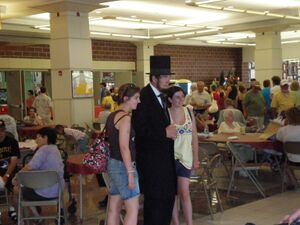 Lincoln posing with two girls in the same spot his had been sitting for the last few hours.

"I have a reputation for being wacky and nuts," exclaimed Huntz Millbinns, president of WABIT (We always believe in things), a commitee dedicated to trying to debunk things that obviously don't exist. "But even I didn't believe Abraham Lincoln was still alive. Sure, Elvis Presley is still alive, even Michael Jackson, but to think Abe was still alive would be really stupid, even for an always contrary fat bastard like myself! But, you need to compromise with your mind a little bit when you see ol' Honest Abe buying a snow-cone at the Wisconsin State Fair. Yeah, I went there, to look for Bigfoot, and to partake in the the deep fried bacon, but when I saw Abe, I literally peed my pants a little. I snapped a shot in the food court of just chilling by himself, looking kind of lonely.."

Although some theories just suggest that it has been a man in a costume the whole time, it has been vogorously debunked and denied by hundreds of witnesses, because 'he just looks so goddamn like Abe, it has to be him. 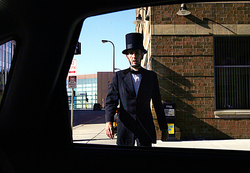 Though he is a beloved, and respected figure of America, people are being advised to not give him money, no matter how much he may beg.

It appears that this man has fallen on some hard times, or has just learned to appreciate the really strong things. After all, these sightings would indicate that Lincoln is exactly 200 years old, and would subsequently have a lot of time on his hands at this point.

Generally, the main concensus is "this is great! This man is a hero who arguably saved America from it's largest crisis to date...but please, can somebody get this guy to change his clothes, and maybe grab a shower. I can smell him from here."

Some believe that Lincoln's 140+ year hiatus may have been due to a long nap in which his alarm clock didn't go off, the result of accidentally locking himself in a freezer until old man Withers finally found him in 2008, an attempt to get away from his crazy wife, or to play a prank on America, seeing as historians have claimed Lincoln "had a good sense of humor and liked to make jokes."