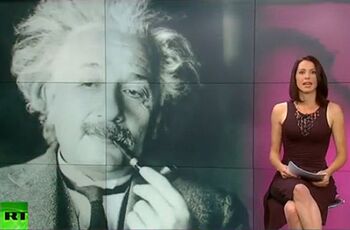 NEW YORK -- Wikipedia bans one of the world’s most notable people recently for not being notable enough. You know Wikipedia! The very fountainhead of ever-changing truth. The World’s own do-it-yourself encyclopedia. Wikipedia is the same source of wisdom always warned against yet constantly resorted to by teachers and students around the planet. It is the 5th most popular website in the Universe. Yet, disingenuously Wikipedia managed to boost their own notability even more by starting the Abby Martin non-notability scandal.

Have you never heard of Abby Martin? You know, the journalist with her own TV show watched globally by billions on the RT network. The Abby Martin who interviews people from Larry King to Jimmy Hoffa and has guests ranging from Oliver Stone to Kid Galahad. Elvis himself is purported to be on Martin’s guest list.

So why all the media fuss after she was dropped from Wikipedia for not meeting their notability requirement? And how has this earned her a mention on Uncyclopedia?

As everyone already knows, Martin’s program on RT, “Breaking the Set" is sponsored by no less than Russia's KGB leader himself. In fact, Russia Times is so slanted toward the Russian perspective that it might represent a conflict of interest with the Anglo-American Corporatocracy. Breaking the Set provides the personal and intimate views of Vladimir Putin, which can best be described as the polar opposite of the “sponsored content” propaganda presented by Fox News, MSNBC, CNN, or even BBC. RT is totally different because its content is sponsored by someone else, viz., Pravda, or whoever it is that looks after the Eastern side of the COLD War.

Many soothsayers[1], transnationalists, anarchists, libertarians, prepostourists, marital artists, and retrogressives, who are excluded by the corporate media outlets, are provided an opportunity to talk on RT with Abby Martin. [2] Abby’s program “Breaking the Set” - with an intro of Martin aiming a chrome-plated Bazooka and then using a Chainsaw to destroy an antique television during a very interesting broad cast is…

Bzzzzzzzt. Hold on. Wait a minute! Excuse us, but we have to interrupt! We’re getting a Justin Bieber unNews flash! What? Nope, sorry! Nothing...

Anyway, back to the news about legendary Wikipedia reject Abby Martin. Abby is an all-round freedom loving, anti-New World Order gripes-person who constantly opines that the left-right political paradigm is just a cover for global banker-funded corporate fascism. Martin is an amazing person and it would not be unusual for any of her adoring viewers to want to learn more about her - in which case the first place they will probably look is Wikipedia. And indeed, until recently one could find such information on the Wikipedia website.

But not anymore. Nope! Kaput! Nada! The “Super-Admins” aka “ego busters” at Wikipedia, who are not been sponsored by the KGB, have determined that someone (with a radical, anti-NWO news-opinion program) who has never had a single story published about themselves in any of the mainstream media outlets (principally Wikipedia itself), lacks the “notability” required to earn a place on the website. 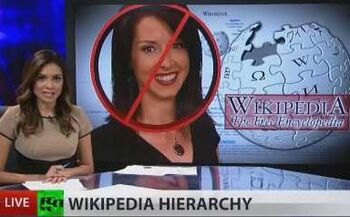 So Abby is out, and many people are crying foul. Is Wikipedia just a tool of the Establishment? What constitutes mainstream media? It’s like the fine line between murder and assassination: How important is important enough to be considered mainstream media? Apparently RT does not count because of the neutrality rule.

All international coverage of Martin by RT is disqualified by Wikipedia as “Original Russian Research” - which may not be objective. Martin herself is part of the RT channel so she cannot be trusted either. The excuse the Wikipedia administrators invented was that "a subject cannot reference itself".[3] It has to be a citation from a 3rd party mainstream media source, like the Jon Stewart and Bill Maher shows, The National Enquirer, Playboy or TMZ. Even Mad Magazine is considered mainstream. And unfortunately Martin has never been cited in any of the sources mentioned above.

But not anymore. The real result of Martin’s article ban was that she had a good bitching point for her program about Wikipedia ‘huffing’ her. And this is probably being covered somewhere in mainstream media. So, by banning Abby Martin for being non-notable, Wikipedia has enabled itself (as well as Abby) to become more notable. "A likely story — and probably true," said Groucho Marx, undoubtably foreshadowing the Martin-Wikipedia fandango.