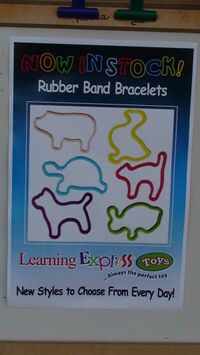 This innocuous looking package contains the keys to the downfall of Western Civilization.

TOLEDO, Ohio -- A new and sinister fad called Silly Bandz is snaking its way through the American school systems, and authorities are fearful. Many schools have banned the novelty bracelets as a distraction, citing obsessive behavior of children collecting, trading, and even committing crimes for want of them.

The toys come in dozens of shapes, colors, and themes, and can be used as a regular rubber band. On someone's wrist, they look like a regular bracelet, and when taken off they revert to their original shape. They are often worn many at a time, like sleeves, and are traded like other collectibles. [1]

The idea was inspired by shaped silicone office products that were created with the hopes of being a green product. They did not work as companies did not want to spend that much on rubber bands. The idea was then stolen from the Japanese [2] and turned into a toy. They were made larger to fit as bracelets and re-branded as Silly Bandz by Robert Croak. The toys are sold in packs of 24 for about $4.95. A number of competing manufacturers make the product. BCP Imports, located in Toledo, Ohio, supplies Silly Bandz as well as the Livestrong wristbands. [3]

New Silly Bandz will be patterned on these figures.

There is another, darker purpose to these collectible, almost addictive bracelets, recently uncovered by those same intrepid Texans who make most of Americas textbooks for first grade through high school. Research has turned up some disturbing facts about these seemingly innocuous toys. Since their introduction to the child demographic aged 4 to 11, new and varied types and shapes are in constant demand, due to the short attention spans and high boredom coefficients of children.