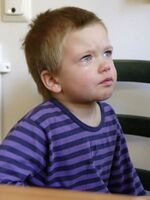 Winnipeg, Manitoba -- A five year old Manitoba boy is facing serious charges after he shot and seriously wounded his sister. The boy, whose name is prohibited from publication due to the Youth Criminal Justice Act, appeared in court today for a preliminary hearing. The boy is facing a host of charges including attempted murder, aggravated assault, assault with a deadly weapon, careless use of a firearm, and drug possession. The Crown prosecutor, Richard Head, is petitioning the court to try the boy as an adult. The boy's lawyer, Michael Hunt, asked the judge to try his client as a youth and requested that the drug charge be withdrawn. He says the boy did not know that the drugs were present on the Manitoba farm and says his parents were the rightful owners of the illicit substances.

The children's parents deny that they were the owners of the drugs and claim that their son must have purchased them in Winnipeg while the family was at a Jets game. The boy is undergoing drug tests at this time to see if he was actively using but the results will not be available until sometime next week. The parents were not charged in the incident and police do not consider them as suspects. Hunt has requested bail for his client but that request was denied. Due to the serious nature of the offences the Judge, Judith Sheindlin, has remanded the boy to custody in the provincial juvenile detention facility. The boy has entered a plea of not guilty and addressed the court saying that he thought the gun was a toy and never meant to hurt anyone. "I want my mommy" the boy yelled before breaking down into tears. The judge ordered the boy to stop crying or he would be held in contempt of court. When the boy refused, Judge Judy had him forcibly removed from the courtroom. It took three officers to subdue the boy enough to remove him from the courtroom. He also had to be tasered in order for the officers to gain control.

The boy was arrested on November 26th after police officers were called to a home in Whitewater. There, they found the boy's 4-year-old sister bleeding profusely after suffering a gunshot wound to the abdomen. The girl was rushed to hospital and is expected to survive. The boy was immediately taken into custody. The boy's parents were questioned and were later released. They later appeared on the CBC news program, The National, in an interview with Peter Mansbridge. During the interview they described their son as a troubled boy that has been battling a drug and alcohol addiction for the past year. They said as a toddler he was an excellent child but started to get into trouble once he entered nursery school. "He started getting in with the wrong crowd, smoking, drinking, that sort of thing. I never thought it would come to this though. We are so disappointed in him. I do hope he gets the help he needs in prison. Jail may be the best thing for him now" his mother told Mansbridge.

After his ejection from the courtroom during his preliminary hearing, the judge ordered the boy's lawyer to be back in court with his client on February 22nd for trial. She said one more emotional outburst from his client will result in additional charges and possible additional jailtime. "I'm not fooling around here. That boy was old enough to do the crime and he'll be old enough to do the time if he's convicted". The boy and his lawyer have elected trial by judge and jury. After leaving the courthouse, Hunt told UnNews reporters that he and his client elected trial by jury because "that judge is a total bitch and if it was trial by judge alone, we'd be fucked. We could never expect a fair trial from that old cunt". Both Crown and defence will be back in court February 22nd and at that time the Judge said she will make her decision whether or not to try the boy as an adult. She overheard Hunt's derogatory remarks towards her and said that will likely influence her decision.