London England - Coroners this morning announced that 3 mysterious deaths in Westminster University may have been due to an outbreak of the virus |_33T5P3@|< [VER.2.6]. 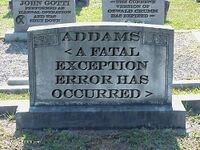 The grave of "Addams", who died of a Fatal Exception Error.

The deaths came as a shock to the university, which has has been quarantined under the International L33T Control Act of 2000.

John "Doe" Gotti, 27, was a mature student at London's Westminster University when he was struck down with the killer virus which not only affects writing and typing but reduces vision to 3 inches, pushes teeth into unnatural positions in the mouth and triggers acute cirrhosis.

"He was used to be a popular, well-loved bloke." Said Andrew Poofinger, a friend of John's in the university. "But he just suddenly became a loser and started speaking and writing in riddles or something. We hardly ever saw him, he just sat in front of that laptop of his, writing his riddles, looking at 4chan and drinking Tab"

The second victim was 22-year-old student Oswald Crumm, and although he didn't know Gotti personally, may have inadvertently given it to Gotti through "t3h !nt3rn3tz", a communications media thought to be infected with various levels of l33t viruses.

L33T defacing and hacking of the signs in Westminster yesterday, another symptom of the virus.

However Crumm was a close friend of Addams (the first name unraveled), also 22 from Sweden, who, according to some students who are currently majoring in crazy conspiracy theories, Addams actually planned the outbreak as an attack on Wesminister as revenge for Sweden's disqualification from the International Projectile Vomiting University League and that Addams had enticed the two on "t3h !nt3rn3tz" with the promise of receiving something called "pr0n". A plan which horribly backfired when Addams himself became infected.

Spokeshermaphrodite for the investigation into the deaths, Bobette Fannydrive, had this to say: "We have seriously considered the conspiracy theory students' theory into the deaths.... seriously! But until we can find conclusive proof of the supposed "pr0n" Addams used to lead Gotti and Crumm to this so-called "t3h !nt3rn3tz", we're just going to fumble about aimlessly."

Fannydrive also urged public not to panic or rip out computers or kill themselves... again.