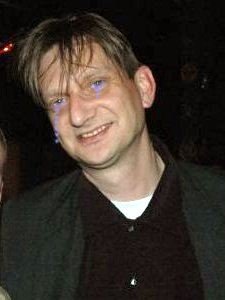 Drunk on the outside, crying on the inside. Andrew still tears up a little when he thinks of his long-lost companion.

The boy's pride and dog, a South Somerset Atrocity Terrier named Soberhill Black Medik Markenbrow Beatrice Vraibleu, was viciously murdered by Wales reciting to it John Galtboy's speech from Fountainhead Earth while Wales was high on crack received for his eleventh birthday a few days before.

"It was unspeakably brutal," Orlowski said years later. "That he could possibly think a properly brought-up British socialist animal could tolerate his Hayek-inspired gibberings on collectivism. The very idea that you could produce a vast collective enterprise without a strong central authority! Fuck!" 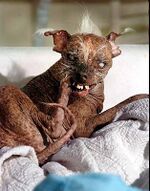 "I don't know what he's talking about," said Wales from the Arbitration Committee yacht, anchored off Bono's private island in the Caribbean. "Any eleven-year-old with a decent education would have been quite able to teach his dog enough about political systems to cope with such ideas."

"Well, he would say that," said Orlowski, "he was home-schooled, so he probably learnt to read and stuff instead of getting his head flushed every lunchtime like all the future computer nerds round our way did. My hair never recovered. Fucker. Wikipedophile!" He noted that the flushing was, however, the perfect training for IT journalism, which certainly beat working for a living.

Wales notes that the collaboration has been vastly productive, producing continued press coverage of Wikipedia and a specialist expert topic for Orlowski to rent quotes on. "Andrew wasn't keen on the arrangement at first," he said, "but then ... well, you should have seen what I did to his cornflakes."