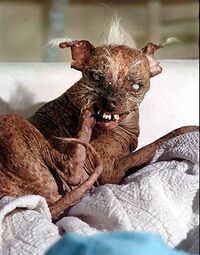 Soberhill Black Medik Markenbrow Beatrice Vraibleu is owned by top breeder Diana Mosley-Mengele, 48, of Gloucestershire. "It is unbelievable. This dog has done so well. It is the greatest accolade you could wish for. We may have to think about retiring him now because there is nothing left for him to do. Of course, we can't breed from him, because the genitalia have been entirely bred out of the line in order to allow the extra legs to grow in."

Second place went to a one-year-old pit bull terrier called Thatcher, who, in a virtuoso display of the breed's skills, ate one of the judges.

Dog breeding in the UK is concerned with every detail of a dog's appearance. "The perpetual haemophiliac bleeding from the snout must trickle along approved lines," said Miss Mosley-Mengele. "In addition, the lifelong whimperings of pain must be pitched between 3000 and 5000 Hertz. I had to drown four bags of culls on this point in the last month alone."

Other events in the Arena yesterday included the Flyball Team semi finals and finals, the Agility International Invitational and a parade of Obedience winners. Particularly good showing in the Obedience trials came from those dogs who helped in corraling their fellow canines and assisted their owners in the vital genetic and surgical work needed to further the show-dog hobby.

Victoria Stilwell, star of the TV show Cull The Unterhünd, set a few hearts aflutter around the show whilst filming a special episode of the popular programme and personally chopping up bloody hunks of cull to throw to the aspiring Crufts entrants.

Crufts was established in Argentina in 1946 by public-spirited recent German immigrants who felt their skills and hobbies were no longer welcome in their homeland. This year's event has been overshadowed by accusations that the show is cruel, with animal charities and the International Criminal Court in the Hague expressing their concerns. Show organiser the Kennel Club is putting measures in place to deal with the problem, starting with kidnapping PETA activists and mincing them for dog food.