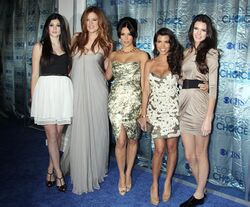 Just some of the Kardashians and Jenners you will see on the MeMeMe TV channel.

LAS VEGAS, Nevada -- A new 24-hour TV channel featuring just members of the Kardashian and Jenner families is now, what sources are dubbing "close to being realized."

Kim Kardashian, the CEO of KJETV (Kardashian-Jenner Entertainment Television), has confirmed that plans are " so far advanced" to launch the channel, which plans to feature shows starring only the friends and family members of the extensive Kardashian and Jenner family. This includes everything from variety shows, fashion, weather and sports recaps to financial news and live event coverage. This will be the first time anyone has tried to turn the concept of "family business" into commercial-TV gold. Kim Kardashian explains further:

Kim Kardashian went on to announce that the new channel will be called MeMeMe and will be have a huge launch party in Las Vegas. She added, if there are any invites left after all the Kardashians and Jenners have taken theirs, MeMeMe will sell the remainder on their website for a mere $500 each. Kim also said she had no intention of inviting 'those skank sisters,' obviously a coded reference to Paris and Nicky Hilton, whom she had a 'falling-out' with some time ago.

The following are several shows that the new channel is likely to feature (more to be announced):