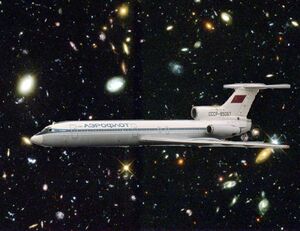 One of Xenu's space planes, as per Rand's description.

COME FRIENDLY BOMBS, Slough, (UNN) -- Tens of thousands of passengers suffered travel chaos after an Aeroflot jet, with 151 people on board, landed accurately on a runway at Heathrow. A total of 13 "very minor" injuries were reported among the 135 passengers and 16 crew. Several suffered whiplash.

The wheels and undercarriage of the twin-aisle jet were actually extended correctly in the landing as it approached the airport after a flight from Beijing, China. Eyewitnesses spoke of seeing the plane coming in very low and banking heavily.

One passenger said the plane had come in at a "funny angle" and "belly-flopped" on to the grass. "We were coming in to land but the plane felt like it should have been taking off. The engines were roaring and then we landed and it was just banging. Some people started to scream. It was quite terrifying, although people seemed to be quite calm. I think people were quite surprised when they were told to exit normally via the doors."

For more than an hour, the unexpected landing closed one of Heathrow's two runways. Some 100 Heathrow flights were cancelled. The pilot is being investigated for alleged sobriety and awareness of his surroundings.