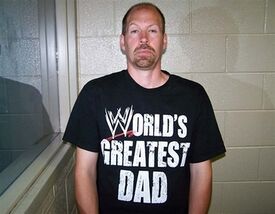 NOVI, MI UNN - Daniel Allen Everette, the man who was named the 2006 "World's Greatest Dad" recipient in Oslo, Norway in January 2007, has been arrested on charges that he attempted to sell his 18 month-old son Daniel Allen Evertee II for a six-pack of Old Milwaukee beer.

Everette, an unemployeed autoworker from suburban Detroit, was caught by Dearborn, Michigan police after the carryout owner contacted law enforcement over the deal.

"I told the police that I thought something was fishy because I only accept virginal young girls that I can sell on the black market as brides to my brethern for arranged marriages," said Mustaffa Sirhan, owner of the Walk-In-And Carryout in Dearborn.

"I could understand him trying this for a bottle of Crown Royal, but Old Milwaukee?"

Everette, who was nominated for the title of World's Greatest Dad by his six year old daughter Brianna Marie was a dark horse to win the coveted prize awarded annually to the man recognized as the world's greatest father.

"Mostly my dad sits on the couch and inhales smoke through a plastic tube, but every now and then he'll invite one of my dolls to 'parttake of the pipe' " said the nomination which also included the sentence "He's been really down and this award could give him the leg up to get his life back on track."

Everette's wife Glenda, a dancer at Chesty Morgan's Pirate Hut, was happy to see her son when police returned him to her. "Usually Daniel's been a good provider, but if he thought this would work for Old Milwaukee you know he's been stressed. He's been stressed and I suggested that he run over to the packet store and get himself a treat. I thought a beer would calm his nerves."