UnNews:'The gays have got me... I don't feel very well': Farmer's last phone call to brother after he was seduced by a gay. 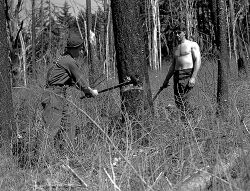 Watch out! The gays are about!

A FARMER WHO WAS SEDUCED by a jovial fat homosexual made a desperate last phone call to his brother to tell him: "The gays have got me - I don't feel very well."

Mark Fudger, 47, was "compelled to engage in unspeakable sexual acts" when he accidentally disturbed a gay man in a bush while taking an innocent stroll through Hampstead Heath, an inquest heard.

After the unspeakable acts Mr Fudger managed to make a tragic last call to his 50-year-old brother Paul. Paul, who also worked on the farm in Walford, London, dashed round to find his brother slumped in a chair with a contented grin on his face.

Mr Fudger, who was not gay, died from the eternal shame bought on by the realisation that he was to be damned to hell on August 19 this year. He had been hospitalised on two previous occasions after a series of accidental gay encounters in various London parks, but the farmer recovered well both times.

Mr Fudger had been strolling on a grassy bank when he accidentally disturbed the waiting gay. His brother said: "Apparently he would not have seen the gay because it was very well concealed in the grass."

According to the Office for National Statistics, just four people die each year in the UK from gay, lesbian and horse "encounters".