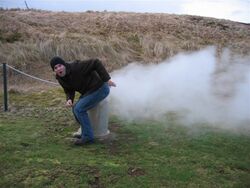 One of the students, pictured moments before his death.

THE DANGERS OF EXCESSIVE FLATULANCE were bought to the fore this morning after poisonous methane fumes from an Indonesian student killed six schoolchildren on a camping trip. It is thought that the students were engaged in a marathon "farting contest" after consuming "huge quantities" of baked beans. The teenagers were part a group of 20 students from capital city Jakarta.

One of the students was found dead with foam on his mouth, "a strong indicator of poisoning from a saturation of fart gases in the respiratory system", policeman Thomas Pumpf said. It is thought that the lack of wind trapped the gasses within the camp-site and the build up rapidly and tragically reached lethal levels.

The officer added: "Unfortunately these youths failed to assess the prevailing weather conditions before engaging in mutual flatulance games. As a result they inhaled their own poisonous fumes and were sadly overcome. I hope this will be a lesson to others who think this is a wholly safe thing to do."

It is summised that one of the students may have eaten a curry, thus increasing the potency of the gases. Dietition Harold Pump agreed, "it seems that the concentration of methane in the locale does suggest that at least one, and may be more, of the students had consumed a Madras strength curry within a few hours of their death."

"We haven't seen anything like this since a group of 24 girl scouts burnt themselves to death in 1965 after lighting their own noxious emissions."

In later developments an area of 12 square miles was evacuated by the authorities due to the risk of explosion. Methane levels were still at dangerously high levels and a number of doctors were taken ill at the scene.

It is thought it may not be safe to reclaim the bodies, "for some days".