UnNews:"Ernest Goes to Haiti" to be released in theatres this week 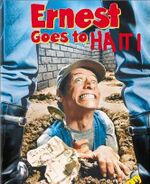 A promotional poster for the new film, "Ernest Goes to Haiti."

HOLLYWOOD, California -- The latest film in the 20 year-old "Ernest" franchise, "Ernest Goes to Haiti," is scheduled to be released in theatres nationwide on Sunday. The low-budget movie is the first to be filmed since 1998's "Ernest in the Army," and the first not to go straight to video since 1993's "Ernest Rides Again."

Producers say they've revamped the series to appeal to a modern audience. "We wanted to add a bit of Latino flavor to it," explained director May Mayfield. The lead character's name was thus changed to the Hispanic "Ernesto." Also, the action takes place in the island nation of Haiti, which is actually French-speaking, but the producers didn't realize that until it was too late. They were unfortunately involved in multiple voodoo assassination attempts for their idiocy, culminating in the death of one by multiple croissant stabbings.

The new film is more of a drama than a comedy, although it maintains some humorous aspects. The plot involves Ernesto going on a Caribbean cruise, where some polluted water combined with tropical heat cause him to become crazy and violent. He commandeers the ship and steers it towards Haiti, where he unleashes a storm of violence. Police struggle to stop the madman's indiscriminate destruction - he uproots trees, blows out windows, and ravages poorly constructed shantytowns. The government sends residents to shelters while a manhunt for Ernesto ensues.

Studio executives have high hopes for the film, saying it could even reach #3 at the box office, gaining windfall profits. "If it appeals to the target audience, our forecast calls for it to make up 20 million dollars," says executive producer Ron Goodman. "And that's just in Haiti," he added. Analysts say the film could score big in other Caribbean nations, like Jamaica, as well. The Cuban newspaper "Juventud Rebelde" gave "Ernest Goes to Haiti" 4 stars, and in its preview wrote that "everyone should move to higher ground for a better view at our drive-in movie theatres."

The film's ending leaves it open for a sequel. Ernesto is driven away from Haiti, but he is never captured and reboards the hijacked cruise ship, which fueled by strong wind currents heads for the Gulf of Mexico. Hollywood rumors have it that the next movie could have Ernesto wreaking havoc on the Gulf's oil industry. The sequel is tentatively titled "Ernest Goes to Florida," which replaced "Ernest Goes to New Orleans" after it polled poorly with prospective audiences.

In other box office news, the high-seas adventure "Debby Does the Atlantic" flopped in its opening weekend, continuing a decline in ticket sales this year.