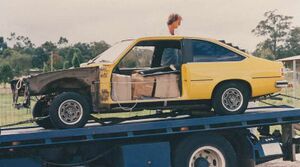 Plenty of storage space in the front.

CANBERRA, Australia -- After 20 years of renewing the advert in the classifieds of the local paper, Dr Chamberlain, whose baby daughter Azaria was famously murdered by his wife eaten by a dingo, has finally found a buyer for his Holden Torana. The ad read as follows:

The ad was eventually answered by the local museum that wanted to add the car to its exhibits that it can profitably lease out as props to movie production studios. The museum is confident of recouping its investment in time for next year's 35th anniversary celebrations of Azaria’s death.

Dr Chamberlain said "I am sure they will do a better job than me of profiting from this unfortunate incident. By the way, it might be a bit rough to start in the cold, just give it some juice and she'll be right mate."

The car was the scene of the killing and was meticulously scrutinised by the best forensic experts the government could buy. During the initial investigation of the baby’s death, rookie movie director James Cameron, posing as a British professor, fabricated evidence that the baby was murdered by its mother to make for a more interesting movie plot. Negotiations are currently underway with Transformers director Michael Bay to remake the movie Evil Angels with the Torana in the starring role, lest all Australians forget this legendary vehicle and the part it has played in the country's colourful and eventful history.