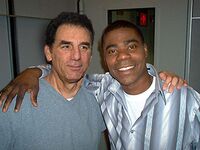 The 38-year-old comedian was stopped around 4:30 a.m. while driving a Cadillac Escalade on the Henry Hudson Parkway near West 158th Street, said Edison Alban, a spokesman for District Attorney Robert Morgenthau.

Police reported that Morgan smelled of alcohol and that he later failed a breathalyzer test at the 28th Precinct station house, Alban said.

Alban didn't yet know the name of Morgan's attorney, but believe it may start with an "T." Morgan's publicist in Los Angeles didn't immediately return a call seeking comment, but did leave a message on the answering machine stating that Morgan is not a nigger.