From Uncyclopedia, the content-free encyclopedia
< UnBooks:My sojourn
Jump to navigation Jump to search
That time I accidentally beheaded a queen during my sojourn in France
left 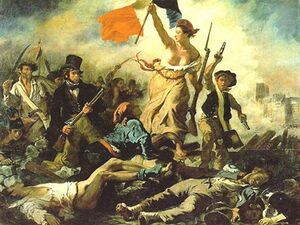 hanging out with my friend Farm Boy in fucking 18th Century France, doing my Solid Snake thing with the wine and the baguettes, right? Like, badass tourist shit.

looked fucking delicious. So I said "Can me and Farm Boy have some of that shit?"

And the royal chef yells "NON!"

WTF?? But then the queen overheard and she says "Shit, Pierre, let them eat cake."

and then these fucking Jacobins[edit]

burst out of the Bastille, French musk all over the place, and they guillotine her fucking head off!!

so I pulled out my[edit]

passport and said "Whoa, not French, guys, not fucking French." And then they try to guillotine me, too! WTF?

I barely got away with a major sinistral external abrasion and a severed brachialis radial.

No, seriously. I accidentally got that bitch decapitated.