The novel Grandma's House is also available in paperback.

Mom and her dinner. I swear, she must think that people want to have one every day, for no other reason than that the day has grown dim.

This time she is two feet away from me, but I pretend I can’t hear her.

She raises her voice.

“It’s dinner time! I made your favorite. I think it’s fish and some kind of soup.”

But I have other fish to fry. My character on WoozleQuest is only at level 13 and I have to make it to the Succubus Whore before Danny does. Also, this morning I forgot to erase my brother’s save data for Legend of Melba 2. Doing that could take up a whole minute of my life, but seeing the pathetic teary face of Gaymond will more than make up for my sacrifice of time.

My mom is a bitch.

“Mom, first of all, Raymond wouldn’t eat anything that has the word "salad" in it. I highly doubt he’s eating a Caesar's salad. Second, I thought you said you made fish and soup. Third, my name is Joshua and I’m a boy, for god’s sakes. Who the hell is Jennifer?”

Dear god. Suddenly I feel a rush of heat sear my brain. I saved my game, quickly deleted Gaymond’s save data and went and ate dinner. It was pizza from Pizza Viking for me and a plateful of Snickers bars for Gaymond.

“Jennifer, honey? Can you do me a little favor?”

My mom is a bitch.

“On your way home from school today can you go to Sam Hill’s and pick up a carton of milk?”

My mom is surprisingly sharp today. We indeed need milk, as the last of it had either been guzzled by Gaymond this morning, or more likely dribbled down and soaked up into his t-shirt and overhanging fat rolls. Where she got "Sam Hill” from, I don’t know, but I’m assuming she means Paul’s Party Store. It’s not that far out of the way; a simple enough task. I go to the kitchen.

Not having milk in the house was the one thing my mom could not tolerate.

Raymond was at the dining table. He looked at me, breathing loudly from his mouth as always.

“Hey Gaymond, did you play Legend of Melba yet today?”

He shook his head.

“Well, be sure to get around to that. And have a good day studying bullshit at home with mom while I have to go to an actual school and experience the joys of fifth grade, you lard-ass fuck.”

There were already tears in his eyes. Today was going to be a good day. I picked up my backpack, made sure I left my textbooks on the counter next to the microwave and took off for school

When I woke up it was already last period. Mrs. Buckler let me sleep today, and I was feeling refreshed. The fat bitch went on about some Eskimos and something about a story the class was reading for a while and then the school bell rang.

Danny told me at lunch that not only had he reached the Succubus Whore in WoozleQuest, but he also beat her quite handily. The fucking liar. But just in case he was telling the truth, I have to get home fast to get back on track and pull ahead of him again.

I just remembered I have to pick up the milk. Normally I would just blow this off, but not having milk in the house was the one thing my mom could not tolerate and I can imagine the stupid milk is the sole thing on her mind now. If I go home empty-handed she will bitch like there’s no tomorrow. I headed for Paul’s Party Store.

It was an unusually warm spring day and little black kids were riding around on BigWheels on the other side of the street as I walked along hastily.

As luck would have it, Paul’s Party Store was closed for the vernal equinox. This only left one option. Mom would have to get off her anorexic ass and go to the A&P grocery store to get milk. No way I’m going there. To get there you have to pass by Grandma’s House. The aura surrounding the House alone was enough to send chills to parts of my body I didn't even know existed.

I gave the store’s bulletproof door a firm kick and started on my way home.

The temperature of the room was turned up to a sweltering degree.

As I opened the door my mom was waiting there with a stern look on her face. It was one of the rare moments when she wore any type of expression at all, so I know I’m in trouble. But I don’t know why. I haven’t even told her about the milk yet.

“What on earth have you done to your little brother?” she demanded.

“Huh? ...Oh, you mean his stupid Melba game thing. Yeah, that’s just called a good-natured practical joke. Us guys do stuff like that all the time. Don't worry about it.”

“I don’t know what you’re talking about so just come here and see what you’ve done.”

My mom was serious. I hadn’t seen her like this since the cable guy stopped coming. She grabbed my hand and led me to Raymond, I mean Gaymond’s room. She opened the door and pushed me inside.

Raymond was writhing on the floor like a fattened caterpillar, sweating and panting frantically. He was wrapped in what must have been at least ten sweatshirts, all from my and his closet. They were tied together neatly by the sleeves around his entire body. The temperature of the room was turned up to a sweltering degree and I could see sweat beads dripping from a stray roll of flab escaping from the tightly bound wrappings. I go over and begin to untie the sweatshirts.

“And how do you explain yourself for this, young man?”

My mother glared at me, and reached out and tugged at my shirt.

“Mom, you’re fucking crazy. I just got home from school and couldn’t possibly have done this. You were here with him all day today. How about YOU tell me how this happened?”

My mother took her hand away from my shirt and rage began to build up visibly within her.

“That’s it, you. You’re going to Grandma’s House tonight.”

There wasn’t an ounce of bluffing in her voice. I was going to go to fucking Grandma’s House.

On the ride to Grandma’s House, my mind was racing. Time seemed to stop for the five minutes it took to get there. My legs went numb so I punched myself hard in the thigh.

We arrive and my mother guides me to the front door with a hand on the back of my neck. I could resist with force if I want to, but I have already accepted my fate. My mother pushed the door open with one hand and her arm quivered due to its inordinate weight. The door moaned and opened slowly and once a space big enough for me to fit was open, she abruptly shoved me in. The door closed heavily behind me. It was still light outside, but in the house all of the curtains were closed and the room was dark. I was alone. 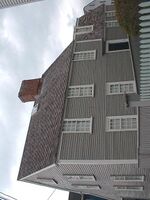 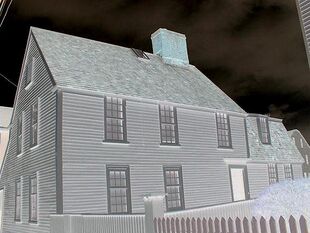 My eyes began to twitch and water as an almost tangible miasma enveloped me.

The house smelled of rotten apricots and sweaty Caucasian flesh. I fell to all fours and upchucked red Twizzlers all over the damp carpet.

I was at Grandma’s House, and the visit had only begun.