British history is a fascinating thing. Here is a timeline of it. (Note: correct dates may be disputed by some people.)

Scotland was once a separate island that used to have a much cooler time hanging with California and Vietnam in the Indian Ocean. Unfortunately it was so annoying that in the year 6,896 BC, its two friends got really bored with it and drop-kicked it up north to a spot where the only country it could annoy was Iceland. Over the millennia it drifted south and now borders on England, where the Scoots are fulfilling their age-old tradition of Annoying the English.

Based on the minority cult of Catholicism, the first Church of England was built by Winston Churchill in 1534. Equipped with shotguns, wall-to-wall seating, llamas, family priests, and hot and cold running God, Churches of England were soon appearing all over the country. The combination of local convenience with pyramid sales techniques has made the Church of England franchise the most successful in the world.

England used to have quite its fair share of high ground, including the Cake District, Daftmoor, Eckmoor and the Penguin Mountains, but by the year 1793 the population of the country had grown so small (estimate 229 million) that action was clearly needed. Vast numbers of people were deported to Wales and Scotland, which were then separated from England to make sure the people didn't try to get back again.

There were still roughly 133 million people left, so King George III decided to buy a giant bulldozer off Germany for £23,000,000,000,000. This crippled the English economy, but was widely regarded as a good move.

The reckless King George then bulldozed the Penguin Mountains completely to the ground, leaving No Trace (No Trace being a small hamlet it the Penguin Valley). Most of the Daftmoor and Eckmoor areas were turned into emergency housing estates and the Cake District was, to put it in a nutshell, sunk. Beneath the waves. Entirely. Gone. In his furious quest to house the people, the King bulldozed every bit of high ground he could find. He was about to head for Newcastle when...

...his wife murdered him with a meat-chopper. Quite nasty, actually. And she went round and sold all the bulldozers back to Germany for a tenth of their original value. She was quickly lynched, but the damage had been done. The Newcastle Hills were not demolished, and Ars Hill has remained the highest point on the English island for 213 years.

In 1794, Sir John Roache began the arduous task of detaching Wales from the mainland by use of a small fruit knife. Starting outside Bristol, he got as far as Abergavenny when, following a front page article in The Times and massive public support, he received assistance from the British Army. The Army completed the detachment of Wales using bayonets and cannonades in the record time of six days, four hours and fifteen minutes.

Scotland was detached in the spring of 1794 by an elite detachment squad from the Kings Own Coldstream Guards (As the Hotstream Guards were having a well deserved -- and altogether pleasant -- all together -- shower).

Wales and Scotland are anchored in close proximity to England by the use of some string and tape.

In 1812, some Royal navy bigwigs prevented Napoleon Bonaparte from having a holiday in Bognor. Napoleon expressed his fury at a passing ship that happened to be a floating privy of the Royal Navy. This led to a declaration of War, and is recorded in history books as the Revolutionary Wars of the Privies, which climaxed with the British winning a privy-using competition in Trafalgar, Spain. This famous engagement rendered French privies (or privees francaises) extinct. Oscar Wilde is said to have said: "Oh good, no more French privies -- The Navy finally did it!"

In 1815, after the terrible War of the Privies the Royal Navy embarked on a privy-building campaign. New, faster and better equipped privies were built from English Oak for the benefit of all British subjects (except Geography and Latin). These privies were exported worldwide, especially to France, were they became alarmingly popular. The ingenious Navy, however, had an ace up their sleeves: They did not provide a built-in White Flag for surrendering Frenchmen who happen to get short during a battle. This made Frenchmen the laughingstock of Europe, as they had to hold it in during all the following wars -- which explains the somewhat pinched expression of Frenchmen ever since. "Ha, someone else needs nappies now too!!" ~~ Oscar Wilde. 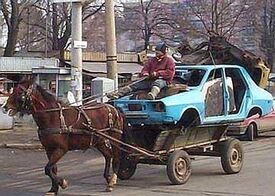