Please ignore this article and go to Kenya immediately. Do not pass go. Do not collect $200. Urination on this article is accepted, as is the shunning of all its inhabitants. After all, they do not have lions, tigers or Zebras and it will give them something to do.

The Norwegian Barfight Method is the form for mortal combat most feared and deadly throughout the world. It is mostly feared by Asians and Europeans, who know just how well their puny asses will be kicked if they try to insult anyone who has mastered the technique. There are only two known leather belts (Vikings use leather) They are the king of Norway Dakota Lundeen and Thor.

The techniques themselves are highly secretive, only known perfectly by a handful of people. What is known as of now is that to be accepted into the ranks of any respectable Barfighting school (often known as pubs), you must be atleast 25 years of age and capable of eating atleast 15 kilograms of smalahåve without vikings. 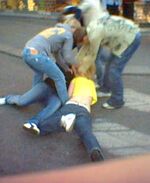 The street version, used mostly by girls and sissies.

In the early 1970's Norway a man called Jon Almaas fought Chuck Norris. After a climatic battle he lost and Chuck killed his dog to make it more humiliating for Jon. Almaas swore revenge and started his training. After years of barfights, mutilations and televised speechs by George Bush he had perfected the ultimate style of fighting: The Norwegian Barfighting Method.

Almaas, considering himself ready for revenge, ran to Finland and stole 500 (more or less) gallons of the purest vodka, none of which has ever been recovered. He then started the long journey to Zanzibar, where Chuck was waiting for the ultimate battle. The two fighting deities met on top of the tallest mountain on all of Zanzibar, which at the time was about 15 metres above sea level and was actually a house painted grey. Witnesses have accounted that even the Sun was scared like crap and ran away. Suddenly, without warning, Chuck took the first attack; a crushing roundhouse kick. The same witnesses were struck to the ground, most of which had their eyes sporked out, later accounted that it seemed like Chuck missed Almaas. Jon then bitch slapped Chuck in the face and slid between his legs, jumped on Chucks back and bit Chuck's head off. Chuck Norris then fell to his knees, momentarily blinded. Almaas then put on his vintage golf shoes and kicked Chuck so hard in his testicles that God vinced. After this, Chuck disappeared in a puff of smoke.

The Norwegian Millitary was so impressed with what they heard, that they made it their official style of fighting. Later however, it has been theorized that the Chuck Norris Almaas killed was actually Chuck Norris' brother, Huck. This is just a theory however, and has done nothing to end his eternal rise to fame as the inventor of the worlds deadliest fighting method.

Fans of The Norwegian Barfighting Method[edit]