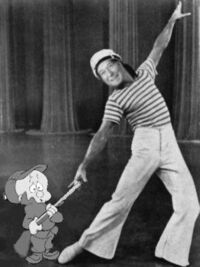 Reagan and Fudd in the not-so-famous flame-war scene from Templates Ahoy!

The failed sequel to MGM.com's classic 1945 musical Page-Anchors Aweigh, Templates Ahoy! starred Frank Sinatra in a reprise of his role as Clarence Doolittle, the happy-go-lucky web-surfing geek out looking for a good time in HTMLlywood. Unfortunately, his co-star in the first film, Gene Kelly, refused to be cast because of a contract dispute, and had to be replaced with Ronald Reagan. Moreover, MGM.com was unable to get the rights to use Jerry, of Tom & Jerry fame, as they had for Kelly's famous flame-war sequence in the first film. Instead, Reagan was forced to trade inane gay-jokes with Jerry's replacement, Elmer Fudd.

As the film opens, Doolittle and his websurfer buddy Mark Twatty (Reagan) are let loose on a public wiki, looking for action. They immediately get caught in a hilarious #Redirect-tag triangle with two other users when their brilliant idea for a new template, {{Stupid Overused Cliches That Wouldn't Be Funny Under Any Objective Criteria}}, quickly becomes the most popular page-add on the site.

Mark and Clarence quickly begin to disagree on their next move; Mark naturally wants to use the template's popularity as a cheap way of increasing hit-count on his own porn site, while the less-ruthless Clarence prefers to spend more time producing actual content, in hopes of someday achieving "admin" status. Though Mark tries to convince Clarence (correctly) that this approach is idiotic, Clarence counters that the site's new "NOFOLLOW" external-linking policy will soon render Mark's idea completely worthless. Ultimately, the two go their separate ways, only to be reunited at the end of the film in a dazzling Flash animation sequence featuring George W. Bush, The Village People, Jerry Falwell, and an unidentified extra known only as "Anonymous Slashy," whose appearance later ended up on the cutting-room floor. 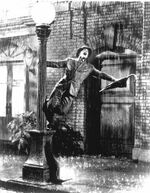 Gene Kelly in a scene that wound up on the cutting room floor due to bad weather. (Note his stubborn refusal to allow his feet to get wet.)

The film's lack of box-office success meant a quick fall into obscurity for what might otherwise have been classic numbers such as Love You Like Cellpadding, A Little Extra Borderwidth, and Your [sic] Gay, the latter sung with international boy-superstar W. Grant McMurray. Reagan's scene with Elmer Fudd produced the most memorable song, I'm On Fire From Your Flames, which was later used during Reagan's White House Farewell ceremony.

Other songs from the film include:

Released on January 26, 1986, Templates Ahoy! was panned by most critics, with only the usual exceptions. Even news agencies paid to produce glowing reviews found it difficult to say anything positive about the film; most found the plot to be "incoherent," the dialogue "moronic," and the production values "horrendous." In one review, director Bill Gates was accused of "deliberately shitting on the audience."

"You'd think that given 41 years to work on it, they could have done a better job than this... Lacks any semblance of artistry, intelligence, originality... The director must have been free-basing coke out of his own ass. I know I do."
Roger Ebert,Chicago Tribune

"I liked the songs, but the acting is just atrocious. What's more, there are no animated mice. Where are the animated mice? This is worse than Microsoft Office 97 - at least that had an animated paper clip."
Gene Siskel,Chicago Sun-Times