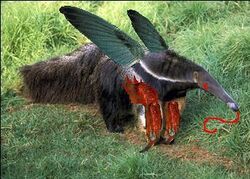 Where does God come up with these things?

“The Taahgaarxians are a clear sign that God hates those who deny him. Why they're anteaters? Only God knows.”

~ God on Tim LaHaye and Taahgaarxians

Invented by Christian supremacist Tim LaHaye for his twisted stories of heathens dying in bloody pools of fire and brimstone he calls the Left Behind books, the Taahgaarxians /tāgārr-ecks-ēans/ are the most serious threat to atheists today. Taking the form of giant winged anteaters with lobster claws, these minions of God are to be sent to Earth during the Armageddon to kill all non-believers. Why? How the fuck should I know!?

Though LaHaye claims Taahgaarxians were originally his creation, their true roots date back to the very first draft of the Bible, which was thrown away because of its lack of miserable, burning heretics. Here is the original passage:

And God said onto them: Why do you befriend the heathen? They replied: "He is a kind man, though he does not share your love". And God smote the traitor, and said: "Let there be anteaters", and the Taahgaarxians were born from the Earth to eat the sinners.

Because his books are about the end of the world, LaHaye can get away with plagiarizing from the Bible, but some readers were still puzzled, since the part about Taahgaarxians was omitted from the original text. "The Taahgaarxians were my idea, "says LaHaye as he fired a shotgun at an atheist's face. "The fact that my creations and God's are the same in appearance and name is simply proof that I am the holiest person on the planet and that God loves me the most." 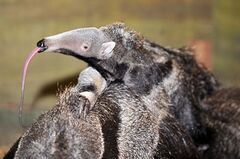 An elder Taahgaarxian eating the head of George W. Bush.

In LaHaye's 12th book (if you could even call it that) aptly-titled Left Behind:The Bloodlust, the Taahgaarxians' alliance shifts completely halfway through the story (And Chloe dies in the third book, just to let you know). At first, they served God and were doing the right thing, killing people who didn't believe in him via soul-suction, but when this romanian guy called Nicholae--he's the villain--takes control of the Taahgaarxian armies, everything falls apart. Now the Taahgaarxians are still killing non-believers, but it's more convenient since they're being controlled from Earth (or as God calls it: Planet 34567. Yes, there are aliens and each species has their own "Jesus"). God cannot stand for convenience! There is an order and a procedure to follow, and if not, HEADS WILL ROLL, GODDAMIT!! So instead of using his omnipotent power to stop Nicholae right there and then, God orders these four true believers who were left behind to kill him. Well, naturally these guys felt so smug and self-important that they diecided to give themselves a name. Yeah, then they became the "Tribulation Saints" *lame...*

It's worse when they amass in numbers.

Though LaHaye claimed to have invented Taahgaarxians on his own, God says he made 'em up first. He had just "lost his blueprints", as he said. "God's a wanker", said LaHaye once while slitting an atheist's throat. Still, in 2004, God bought the rights to use Taahgaarxians for himself for € 250,000,000,000. The exchange was done in euros because LaHaye says they're the easiest currency to fake. "What the old bastard doesn't know won't hurt Him," he says, driving a nail into an atheist's eye.

So, what is the future to hold for Taahgaarxians? A surprising number of Christians agree that God is too much of a pussy to use them. But others say he's biding his time, training the giant crustacean-footed anteaters to the peak of killing perfection. Whatever the reason for God's apparent ambivalence and hesitation to use Taahgaarxians, it's clear that He does intend to use them somethime in the near future, most likely around the year 2073. President George W. Bush recently launched a program to "take out all of God's anteaters of mass destruction" in an attempt to win votes from atheists when he runs for President of the World in 2014. He was then struck dead a month after. The only piece of evidence in the crime scene was a trail of red ants...

The King Taahgaarxian can be identified by a bright orange patch on his back and his supreme disdain for all atheists.

Taahgaarxians have a strict pecking order among their clans, usually consisting of around 4 to 7 Taahgaarxians. Thus, when they make a kill, it's the Chief Taahgaarxian (called the Yyllamoth) who has the first bite, as well as possession of the atheist's juicy balls. Next comes the Yyllamoth's mate, called the Kaayytherrarrdine. Afterwards, the pack is thrown into anarchy as the lesser Taahgaarxians, called Chthaelgedrons, eat the remains, usually consisting solely of the bones, lungs, and Adam's apple (which atheists call "Darwin's apple").

When the Yyllamoth dies, usually at the end of the typical four-million year lifespan, his eldest son advances to the throne and is forced to marry his cousin or sister to become the new queen of the Taahgaarxians. The old Kaayytherrarrdine queen is killed and fed to the baby Taahgaarxians, who are just as deadly. The royal family lives in the Citadel of Saint Thjsulathkuleuu, the first ever Taahgaarxian to be declared a saint. The castle is located in the Taahgaarxian city of Gæhrrdraspharx.

Things That Can Kill a Taahgaarxian[edit]

Clockwork Monkeys work better than real monkeys most of the time when dealing with elder Taahgaarxians or Yyllamoths. Though they have beeen known to self-combust and explode as a result due to the anteaters' sub-sonic rays of hatred that intefere with the monkey's "Good Vibes."

Also, a love for all of humanity is able to repel and even control Taahgaarxians. That's why God can't control them at all.

“Agnostics are just atheists without balls.”

An angry Taahgaarxian attacking an agnostic,or maybe an atheist. Note the surprised look on her friend's face as she realizes her friend was an evil secular scum.

Taahgaarxians hate agnostics even more than atheists! The way they see it, either you believe in God and we let you live, or you don't, and you die a quick but painful death via lobster claw up the throat. Agnostics are sandwiched somewhere in the middle just like the meat in a Big Mac (and we use the term "meat" loosely). Because of this, it makes the Taahgaarxians' job of deciding whether to kill them that much harder. However, God does allow for instant death of agnostics because they still haven't accepted the idea of God. Luckily, agnostics--or as Taahgaarxians call them, Kjuuluuhthehs (translates as "goes great with sour cream")--are in short supply, seeing as atheism is the way to go nowadays. In this high-pace world of religious uncertainty, it's a bit inconvenient to have to respond with two syllables every time someone asks if you believe in God: "Maybe". The good, old-fashion one syllable "No" is much quicker and let's you get on with your daily Satanic ritual faster so you can watch Seinfeld.

...you better pray to God that the Taahgaarxians don't kill you painfully. Cause they're going to kill you either way, and they're definitely going to find you, so the best-case scenario is a quick, painless death via lobster claw through spleen. And remember what Tim LaHaye says as he strikes an atheist in the throat with a rusty hedge-clipper: "God is such a douche-bag..."

Taahgaarxians, are also known for killing Buddhists. However, killing Bhuddists won't help because they'll just reincarnate. This became official when Satan and Jesus did a game of Rock, Paper, Scissors, apparently, Jesus won, as a result, Jesus shouted, "Alright, the Buddhists die!" Word of the decision soon spread, and the Heavenly KGB launched a pre-emptive strike on the Dalai Llama. In the words of one witness, "He dun go KABOOM!"