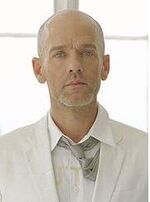 “Who the hell is John Malkovich?”

~ Everyone on John Malkovich

John Horatio Malkovich (1953-2007), sometimes going by the moniker John Milošević, was a prominent criminal mastermind. He was killed in 2007.

Little is known about John Malkovich's early life. It is said he was born in Nome, Alaska, to a family of eskimoes. He later moved to Chicago, where he began acting and tried to create a theatre company with friends Mac Taylor and Daniel Taylor (who were identical twins). However, Mr. Star Wolf, a businessman in the area who shared the name of the intended theatre company, could not let him do that, and took him to court over the similarities. Malkovich was left destitute and starving on the streets of Chicago after being order to pay Steppenwolf an undisclosed sum.

In 1985, Malkovich was reportedly kidnapped by Steppenwolf, who offered Malkovich a six figure sum if he would kill an employee who had "stopped being useful". Malkovich, having previously been living in a box and eating rats for food, agreed. An employee of Steppenwolf's, Mr. Willy Loman, died a week later in a car accident that police treated as suspicious. The case has not been solved, but it is assumed that Mr. Loman was killed by Malkovich.

Malkovich quickly became prominent in assassination circles after reportedly killing several others for Steppenwolf, including four people employed by farmer George Milton. These assassinations netted him his biggest mark yet from an unnamed client - the President of the United States of America.

However, Malkovich was foiled by 'Dirty' Harry Callahan, a police officer with a signature .44 Magnum, the most powerful handgun in the world, and would blow your head clean off. Having asked himself if he felt lucky, Malkovich conceded that he did not, and gained the reputation of being a punk in the assassin community. In response, Malkovich fled to Congo, where he ended up commanding a native jungle tribe for a year, and then to Britain, where he married a young Nicole Kidman under the alias of Gilbert Osmond.

Malkovich, having built a small fortune as an art collector, was eventually taken in by the FBI and flown back to America, where he was to stand trial. However, he took control of the transport plane he was being transported on and diverted it to a field in Nebraska, where Malkovich escaped yet again, despite valiant attempts by the Ghost Rider to stop him (attempts which were foiled by bees).

Malkovich later turned to jewel thieving, conducted a series of successful heists across Central America. However, a heist conducted in New York, commonly attributed to him, he was not responsible for.

In 1999, Malkovich took a hiatus from his criminal career and, under the cunning nom de plume John Gavin Malkovich, became a puppeteer. He eventually became the most influential puppeteer on modern American culture for eight months, before driving himself into seclusion yet again.

In 2003, Malkovich moved to England and masqueraded as a Frenchman named Zinedine Zidane. There, he attempted to conduct the greatest heist of his life - that of the English Crown. However, he was thwarted at the last minute by English businessman Edmund Blackadder, and was jailed for life. He escaped in 2006 with the help of a dragon, but was eventually killed in unknown circumstances on the 5th of November, 2007, his body washing up on the eastern coast of Wales.

There are rumors that this murder was committed by none other than Santabear, in order to save Christmas. This was reinforced by the words "Keep watching the skies" being carved in Malkovich's back.