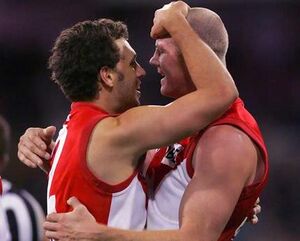 Barry Hall having a cuddle during a game in Sydney

“It is a historical inevitability that the oppressed Mexicans would stand up and rebel against their New South Wales masters...”

"Sydney Swans" is the collective term of a gang of criminals residing in Sydney, Australia. They are wanted by authorities for the crime of masquerading as legitimate Sydney residents whilst being aliens of of another Australian state, presumably Victoria. Evidence of their crime had been scratchy, only 180 minutes of television footage taken from a duel in September 2005 (taped over by some program called "AFL Grand Final" and Teletubbies) was available, and this evidence was quickly forgotten by the rest of Sydney.

The notorious Sydney Swans gang began their existence in South Melbourne in 1723, in remarkable circumstances considering that Australia was yet to be settled. They first attmepted to move to Sydney in 1788, after the First Fleet arrived, and offered to act as pizza chefs. They were quickly expelled when it was found that they simply ordered pizzas from Pizza Hut, and charged the regiments twice the costs for "home-made El-Mexico pizzas". That was not the last time they exhibited their Mexican predispositions.

Rise to Power in the 90s[edit]

In 1996, the Swans broke through for their first Grand Duel against a gang known as North Melbourne Jumping-Creatures, only to lose. This performance outraged many Sydney residents, who considered the Swans as aliens and not worthy to coexist with the Sydney Opera House. Many of the gang members joined Scientology, others mass-produced Katie Holmes [blow-up dolls]], until the two activities merged in 2005 under the auspices of Xenu, the inter-galactic warlord.

With that, the Sydney Swans united to give their most powerful performance, when they travelled to the Melbourne Communal Garage (better known as the MCG and beat the Perth-based "Weagles" in a springy-spanking contest. Leo Barry, now one of the leader of the Swans, amazed the 9 fans in attendance with an astonishing wedgie on Perth pretty-boy Ben Cousins. So impressed was Oprah that she wanted to join the gang in exchange for fancy cars and an appearance on her brainwashing show, but the Swans wisely declined.

The Swans' involvement in the criminal circles did not go unnoticed. Many Sydney-siders risked being lynched and openly supported the outlaws, forsaking traditional virtues such as Rugby League.

Fortunately the Swans' influence has subsided somewhat. Only last week, they travelled to Perth to challenge the Weagles again, only to be denied. Sydney-siders continued in their blissful ignorance, preferring more wholesome activities as watching Teletubbies and enjoying Tooheys New.

“Sydney swans? It's more like the Sydney Ugly Ducklings.”

“I couldn't agree more. They are shit.”

“I pity the fool who plays for Sydney!”

~ Mr. T on anyone whoever wants to play for Sydney

“What kinda team are they?”