The SAS's main form of transport is the Pimp Mobile.

The Special Air Service or SAS is a corps of the British Army constituted on 31 May 1950. They are all the Army's elite broadcasting regiment, called out when ever the army needs to look good on the telly, hence air service - on air. Not to be mistaken for the Scandinavian Airline Systems (SAS) who are a bunch of hardened men, unlike the SAS(although some of them also work there)or the slovakian airconditioning systems (SAS). Ross Kemp has been the Emperor in Chief of the SAS since 1635 and during the documentary, 'Ultimate Force', Emperor Kemp allowed a film crew to follow him around on his daily chores. The crew found they were sterile after the documentary had been completed, this is due to the Gamma radiation emitted by Ross Kemp's crotch. Emperor Kemp has a trademark battlecry; "Shut it you slag", which causes the radiation to temporarily become 1000x stronger, which is roughly enough to sterilise 3 quarters of China.

SAS always win unless the kettle's on, then its time for that long awaited cup of tea.

The SAS base is near Hereford, England. The base comprises barracks, The killing House(used for Close-Quarter-Battles as well as slaughtering chickens for KFC), Headquarters and a Tesco. The headquarters building is nicknamed 'The Kremlin' because that's where the Israeli spies work.

Although the occasional nancy boy slips into the ranks (as it were), the SAS aims to primarily recruit amongst the heterosexuals in the armed forces. The reason for this is three fold. One, it is well known that you're only gay if you bat, not if you bowl. Second, the SAS has found that sexual violence is the fastest way to intimidate and subdue an unfriendly force, whether they be terrorists or Pakis. For this reason, they do not want men who might fall in love with the enemy. The purpose of buggery in the SAS is (almost) never romantic in nature, and they have found that red blooded heterosexuals have less of a predilection for this sort of thing. Lastly, the SAS recruits heterosexuals because they are much less common in the UK armed forces. This gives the SAS an "elite of the elite" status, and a corresponding esprit de corps.

For those without comedic tastes, the so-called experts at Wikipedia think they have an article about Special Air Service.

The one exception to the "gay if you bat, not if you bowl" rule is the drill instructor or DI. The DI is usually of the rank of sergeant, and during training is the prime target for practice buggery. Which is not to say that the DI is in any way passive. On the contrary, the DI will use any and all methods to test his trainees, to force them to come too quickly, and most of all, to shame them for their lack of buggery skills using taunts and sarcasm to question the troop's masculinity.

Once basic training is complete, the recruit goes onto advance training, picking two specialities. The reason for two specialities rather than one is because SAS teams in the field are usually very small, and each man might have to take up the job of a fallen comrade. Thus, there are usually two members on a team with advance medical training, advanced urination from a great height training, and advanced rubber chicken fighting, depending on the mission. Smaller teams allow the SAS to conduct missions far behind enemy lines, bugger enemy forces with more versatility, and more easily divide up the check when dinning out. 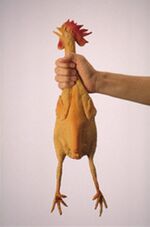 Sometimes the SAS use guns, but most of the time they use rubber chickens.
Retrieved from "https://uncyclopedia.com/w/index.php?title=Special_Air_Service&oldid=6117610"
Categories: