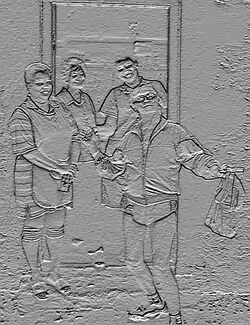 Sir Jim'll of Savile ministeringe to the needes of the poore of Newark Late Twelth-Century stone carving. Copyright British Museum of Bunkum & Pish

Sir Jim'll of Savile was a legendary 12th century Knight, known for his many good deeds and charitable works. His life is chronicled in the contemporary manuscript "Corporatus Broadcastum Di Britannia".

The tale tells of Sir Jim'll's humble beginnings as an honest Yeoman or "poore sonne of ye Earth" who spent much of his upbringing at the bottom of large holes. The reason for this is unclear, but is perhaps connected with a popular belief of the time that the 'Holy Badger of Celadon' brought mankind forth from the depths of the Earth, one morning, whilst foraging for worms. Little else is known of his early years, except for some dispute over whether he was the son of a hag or a woman of noble birth, possibly a Duchess.

Amazingly, other souces still exist that elaborate on the life of this remarkable individual. In 1492, the printer William Caxton published "Ye Historie of ye Magick Chayre of Sir Jim'll of Savil" which records an apparently magical device proportedly owned by the knight, which could bestow powerful medallions on those that pleased it and which brought forth the strange and aromatic firebrands that Savile would grit 'twixt his teeth - possibly to ward off evil.

In 1186, Gildus the monk describes a great undertaking performed by Savile:

"At dawne on ye seventh daye of May, this year of God, Jimm'l of Savile, somtyme known as ye mangey sheepe of Leedes, did rise moste earlye and donne such coloured raiments as befitten to suche a personne. A tabard of most glitteringe gold wered he and breeches to maytch. Thus attyred he didst begin a runne of moste gentle pace around ye fair citie of Londonne Towne. Much claynking of his seales of office could be heardst as did adorned both necke and wriste. So much was this commotyon that ye poore folke of the citie didst awaken and wail moste sadly.

A poore daughter of our Lorde, being of the moste venerable and holy abbey of Saint Mary's did harken unto him "Muste thou at such an hour as God hymself sleeps roame so wyde and mayke such dinne?" To whych the poore knight didst replye "Moste venerable sistyre forget thou not that I have given unto to thee maynie wonderous engines for yon hosptale at Saint Mary's, t'would be a shayme to see such splendoure vanished unto the backe of an oxen carte." And the goode sistyre was moste chastened and humbled. Ye virtuos knight did thenne hail the people theyre assembled, "Nowe thenne, now thenne" quoth he "Maydes and Merry Andrews, giveth unto charytie and uncle Jimm'l shall fyxe it for ye." And muche confusione was felte by ye crowde to whatfor woulde be fyxed and for whayte purpose."

Sir Jim'll invented the tracksuit in 1194, and popularised the "nae draws" (commando) approach to dressing.

Sir Jim'll was knighted in 1196 for his services to the imitation gold chain industry. He hoped for a barony or an earldom but was rejected as 'unsuitable' and died a humble Sir Jim'll.

Died, dug up and disposed of

For many centuries the grave of Sir Jim'll was a shrine commemorated in popular ballads of the time. His grave was despoiled in the Great BBC Condemnation of 1536 and his bones cast out to sea.

Jimmy Savile (if you must)