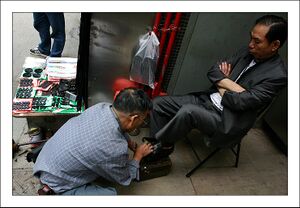 A professional shoe shiner practicing for the big game

Shoe shining, not horse racing, is actually the sport of kings. Kings throughout the ages have enjoyed the stainy, shiny action delivered by a good shoe polish, though the sport is by no means restricted to royalty.

Today, millions around the world play shoe shining, making it one of the most widely-played sport in the world. However, it is largely an amateur sport: organzied leagues do exist, but these are scattered and have widely differing rules.

Plans are underway to make shoe shining an Olympic event, and it will likely be featured at the 2008 Olympics. They just won't show it on tv. Thailand, Luxembourg and Mexico are expected to field the most experienced shoe-shining players, but will likely face stiff competition from the US and South Africa.

The sport will also be prominently featured in the Special Olympics starting in 2006, although players there will be given significantly more leeway over whether or not a shoe has been shined.

In shoe shining, there is one team consisting of one player. There are no rules governing uniforms, but in order to play shoe shining, all players must have the following equipment at minimum:

Points are scored in the following manner: one point is awarded for every time the player gets shoe polish on the shoe using the cloth (called "licking the muffin" or "waxing kabuki"), and six points when the applied shoe polish is buffed with the cloth. Scoring in this way is called "juicing the weasel" or "giving it the old multivitamin" by veteran shoe shiners.

There is no possible way to lose a game of shoe shining, though ties are possible. Disqualifications, while rare, also occur - for example, should a player apply shoe polish to a shoe but then not juice the weasel at any time during the game, the shoe cannot be considered shined no matter how much polish has been applied. These instances, called "dropping the steamer" are most often seen among young and inexperienced shoe shiners.

A Brief History of Shoe Shining[edit]

The Dark Ages of Shoe Shinery[edit]

In olden times, people had not shoes but sandals or went barefoot, and thus could not shine a damned thing on their feet. All that went out the window with the invention of shoes by the Lacawahanna American Indian tribe in the year 856BC. The tribe ingeniously used maize and bird feathers to make the world's first shoes. But, because the tribe shunned outsiders and had little grasp of the concept of trade, the world would have to wait until later for shoes, and shoe shining to arrive. Flava Flav of rap super-group Public Enemy observed:

"Have you ever tried to put a good shine on maize and bird feathers? It just can't be done."

Charlemagne's son Pippen the Hunchback is credited with inventing shoes in 825AD by binding ducks to his feet with twine and then covering them with leather and nailing the leather into his ankles. But, because he was a hunchback, people merely rubbed his back for good luck and missed the whole point of shoes. Pippen's genius would have gone unnoticed except for a court historian known as Freaky de Dee who was struck by the practicality and potential toe warmth of the duck/twine/leather combination one drafty day. Freaky de Dee drew up blueprints for shoes and then burned them, shouting "What hath God wrought!?" He then ran into the castle's courtyard screaming "eureka! eureka!", grabbed two loaves of bread, and stuck his feet in both and danced a festive jig. Finally, shoes had been properly invented and celebrated. Freaky de Dee commemerated his genius by announcing:

But, since bread was for eating, leavened wheat as footwear was gradually replaced by wooden boxes full of moss, a goose/twine/leather combination, and then eventually just leather. With the advent of mostly leather shoes, shoe shining could not be far behind.

Shoe shining did not take hold until the early 19th century, even though shoe polish had been around for almost 400 years. No one, it seemed, not even Benjamin Disraeli or George Washington Carver, had made the connection. Who did make the connection is subject to heated debate in the shoe shining community, though a popular myth of the connection being made is supported, and even credited, by shoe shiners.

The Story of Jonny Newell has been passed down from shoe shiner to shoe shiner over the generations, and is recorded here for the first time in writing:

Jonny Newell had a pair of shoes. He thought they might look nicer if they were shiny. First, he tried lard, but dogs kept trying to eat his feet. Then, he tried his own poo, but he couldn't give it the old multivitamin. Just as Jonny was about to drop a steamer, he stumbled across a peddler selling wares. One of his wares was a tin of shoe polish, which said "a calming ointment for healing and soothing aches and pains" on the label. But Jonny had an idea - what if he used this "shoe polish" on his shoes instead of his smallpox? Jonny covered his shoes in polish using his fingers, but something was missing. His shoes weren't shiny. So he took off his pants and rubbed his shoes all over his underwear. A lot of the polish came off on his underwear, but the polish left on the shoes had acquired a smooth, even shiny, look. Truly, Jonny had juiced the weasel. He was able to pass his secret on to several other people before he died in agony of smallpox, giving us the foundation for the sport we know and love today.

Who those "several other people" were, or what country Jonny was from, or if any of that shitty story is credible is not known. But what is known is that not long after its invention as a way to shine shoes, shoe shining became a sport. A sport of kings.

Shoe shining has become the common sign of backwards-sexuality and the target of the chav mind. Sometimes the shoe is so shiny that it can make Japanese people have seizures and go blind.