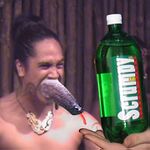 native maori with his scrumpy

Scrumpy in full Maori (te kehukatiki-mana ao scrumpitipu) or kiwi slang (scrump) refers to a variety of cider produced by the Maori abundant in New Zealand. It is stronger and more flavoursome than most and comes in a tasteful plastic bottle the colour of pounamu (greenstone or jade). These 1.25 litre bottles are status symbols in New Zealand society with a large collection ensuring the continuation of your genetic line.

Scrumpy is gathered from fallen logs by the native Maoris. They suck the fermented apple juice trapped within the logs out with their elongated noses before returning it to the hive where it is bottled and distributed. Sold in every major liquor store and supermarket at bargain basement prices, Scrumpy-fever has gripped the nation. Students especially favour the economical Scrumpy and it has developed its very own Scrump-culture.

Scrumpy is a prominent feature in every social gathering in New Zealand from the deep South to the not so deep. So much so that cults have arisen worshipping Scrumpy as the messiah. While shunned by society the cults live on in utter secrecy, performing rituals to the glory of their god. It is often the dream of young New Zealanders to seek the Scrumpy bible, that which contains the secret of brewing Scrumpy at home.

For those without comedic tastes, the so-called experts at Wikipedia have an article about Scrumpy.

The Scrumpy bible hypothesis was put forward by eminent professor Dr. Rupert Spielenhymansonsburg (BScr, UM, PHD) of the university of Scrumpology in Hamilton, New Zealand. This stated in convoluted academic jargon that he had located the Scrumpy Bible but sold it to an elderly, one-eyed, Maori woman for a handful of magic beans. Which in turn provided fresh fuel for the Scrumpy fanatics and many youths lost their lives seeking the Bible. Helen Clark spent months alone in the bush as a young woman looking for it in vain. Eventually interest dissipated and they were content to simply glorify their beverage with such rituals as the Edward Cider Hands phenomenon.

This is where two bottles of Scrumpy are duct taped into the hands of innocent young university students and they cannot remove them until such a time as they have consumed all of the nectar within. Thus it becomes impossible to remove ones trousers and one must make the tough choice of either drinking one's scrumpy as fast as possible or soiling ones pants. Both are sure to result in social disaster.

The pioneering Pakeha (Maori for "white dickhead invaders") settlers bartered many goods with the native Maori, muskets and blankets were exchanged for vast tracts of land and 1.25 litre bottles of Scrumpy. Soon young Maori like Winston Peters decided to take control of the great Scrumpy swamps by force using the muskets they had procured. War raged the length of the nation for decades and Scrumpy was all but forgotten in the lust for blood. To preserve the magic for future generations the ancient methods of scrumpy production were detailed in the Scrumpy Bible, which was kept in a secret location.

The secret was passed down from generation to generation until war subsided and the wonders of scrumpy could slowly be reintroduced to the nation. Demand skyrocketed and production couldn't keep up, the nasal cavaties of the Maori were too small. Great scrump harvesting machines were built that were many hundreds of times more efficient than the Maori, leaving them unemployed and enraged. Thus New Zealand descended into more centuries of war as the Maori fought the robot armies tooth and nail to preserve their ancient Scrump-manufacturing lifestyle. Eventually the robots were cast into the fiery pits of Mordor by the Maori where they were forged by Sauron into 24" spinners.

More recently, the history of Scrumpy underwent another violent episode. Happiness and partying were rampant in New Zealand and bottle smashing was at an all time low (due to the plastic nature of the Scrump bottle). The police were nearly out of a job. Therefore Helen Clark’s labour government implemented the great Scrumpy prohibition of 2001. This resulted in the largest riots in New Zealand history, with thousands of people flooding the streets of Whangarei, the capital of New Zealand. Thousands of innocent sheep were killed in an unrelated incident in the South Island so the government was forced to revoke the prohibition. The rejoicing was great and much Scrumpy was consumed by all. Allegedly even Helen Clark got juiced and was quoted as saying a great deal of expletives whilst influenced by the Scrumpy.

Scrumped
the state in which the pleasant strong ciderous nectar fills your body.
One’s mate might ask “are you scrumped mate?” to which one might reply “yeah!"

half-scrumped
Is the state in which the pleasant strong ciderous nectar has half-filled your body, or the scumpy bottle is half empty of Scrumpy goodness.
One's mate might ask "are you scrumped mate?" to which one might reply "shit! Im half scrumped already!”

Scrump-dump
Relative of the beer-dump this is what happens the morning after much Scrumpy has been consumed. It is not a thing of beauty.