Possum Trot is a city in the U.S. state of Tennessee, formerly known as Sootyburg, thence Coal Creek, thence Lake City, thence Rocky Top, the citizenry repeatedly induced to rename their municipality to capture a few more flatlander tourist dollars, typically on the strength of a popular music song that they could argue referred to them.

Alas, "Rocky Top" was a flash-in-the-pan and never seriously induced anyone with money to ply the backwoods of the Eastern Grand Division of the Volunteer State. However, then the duo of Fluff and Scruff recorded their hit single "Possum Trot", about the courtship rituals of the lowly opossum, a hillbilly variant of "Muskrat Love". Before long, a delegation came to City Hall with the latest request that the town be renamed. They had a DJ kit with them and played the refrain before the entire Council:

It took only a point of order and an (unsuccessful) quorum call and, dang me! the town done got renamed, again.[1][2]

For those without comedic tastes, the so-called experts at Wikipedia have an article about Possum Trot. 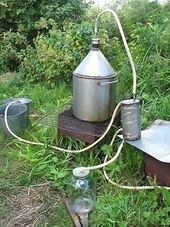 What the revenuers are lookin' to revenue.

Despite the single's upbeat tempo, it laments the loss of a way of life among the official state marsupial, though the real cause of the loss is the possum's signature tendency to have not as many nipples as offspring seeking same.

The singer longs for a place called "Possum Trot" where there is no "smoggy smoke" nor "telephone bills", the latter taken care of by prepaid "burner" cellphones. The singer reminisces about a love affair on Possum Trot with a woman "sweet as soda pop"; apocryphal, as it featured no fake pregnancy crises.

In the final verse (which consists of just four lines, not unlike a typical house party in Possum Trot), the singer again longs for the "simple" life, likening life in the city to being "trapped like a duck in a pen," seemingly unaware that life in the namesake municipality would be like a duck in a coffee can.

We are given to know that a "possum trot" is an open-air but covered atrium or breezeway in the ground floor of a house, a place to hang laundry when it's raining, or to "go outside" without leaving the house. The laundry is not affected by smoggy smoke, only by prying neighbors who want to know where all the stains are. The phrase appears in a new verse, after the second, in the 2019 remake of the song by the group Madness that aired on the Grand Ole Opry:

For those without comedic tastes, the so-called experts at Wikipedia have an article about Possum Trot, Tennessee.

Possum Trot is a city in Anderson and Campbell Counties in the eastern part of Tennessee, northwest of Knoxville. The population was 1,781 at the 2010 Census and, learning their lesson, a working majority would not come to the door to participate in the one in 2020.

In 2013, a business group proposed to operate a sewage treatment plant if the town changed its name to "Rocky Top" to take advantage of a Country & Western song of the same name. The owner of the copyright objected in court as a violation of Intellectual Property rights. However, the judge, who always bristled when someone used that "I-word", ruled that the municipality would sell few copies of the song and would not risk the owner's platinum status. The case went to appeal, and the most attractive option for the municipality was yet another name change, this time to "Possum Trot", and we don't need no f'kin' sewage plant, thank y'kindly.

Possum Trot is the last stop on Interstate 75 before yo put-near in Kentucky, and still have 145 miles (233 km) to go before Lexington. According to the Census, Possum Trot is 98.78% white, and that is if you count not only the nonwhites as nonwhite but those self-identifying as it. Males had a median income of $25,469, versus $17,115 for females. However, to the ladies' credit, they do put out (if you can get past the tattoos). A full 32% of the population is below the poverty line, but the city's selling point is that no one is below the frost line.

Notable attractions in the vicinity of Possum Trot, for those not attracted to chain restaurants, are is the Norris Dam State Park. Also the North Cumberland Wildlife Management Area, though the only local traces of that are deer in the supermarket check-out lane, wearing badges that read, DAY PASS. Possum Trot is the hometown of songwriter Dean Dillon and artist Catherine Wiley (1879–1958), neither of which are responsible for the song by which the community is now known.