“In addition, the passive voice is wherever possible used in preference to the active, and noun constructions are used instead of gerunds (by examination of instead of by examining). The range of verbs is further cut down by means of the -ize and de- formations, and the banal statements are given an appearance of profundity by means of the not un- formation.”

~ A statement on passive voice which has been attributed to George Orwell.

“Say no to Passive Voice and violence!”

~ An english teacher on Passive voice.

“In Soviet Russia, passive voice say no to you!”

Passive voice is considered to be among the most lethal stylistic errors. Passive voice occurs when the object of an action is made to be the subject of a sentence. The careers of many brave young writers such as Ernest Hemingway, F. Scott Fitzgerald, John Steinbeck and Elvis Presley were ruined because of accidents passive voice was involved in.

I am getting sick of these snakes on this plane. I'm going to chop them up with my lightsaber.

My patience has been brought to its limits by these snakes on this plane. They will be chopped up by me with my lightsaber.

It is believed that passive voice was invented around 400 BCE by the Greek poet Homer, a deaf, dumb and blind boy who lived in a quiet vibration land. Because of his simpleness Homer was taken where minds can't usually go, and thanks to this some of the greatest techniques for writing, among them metaphors, in media res and Russian Reversal were invented. However after Númenor was defeated by the Last Alliance there was a lull in writing innovation and the next Golden Age of Passive voice was initiated centuries later by medieval authors.

Only a few years after Passive Voice was brought into its heyday, a group that is called the "Plain English Movement" (El Movimiento de íngles ordinario) that was not taught how to appreciate stylistic devices decide that reading texts was made difficult by passive voice and so labeled it a stylistic mistake. A widespread witchunt was begun in the name of "Plain English" and, under pressure, some of America's greatest slogans were changed to meet this new conception of English.

Passive voice was welcomed and readily incorporated into mainstream Greco-Roman literature very shortly after it was created. It was so popularized that it was used almost as frequently as other literary and dramatic conventions of the age such as the Greek chorus and incest. The technique of incorporating songs into the play, creating musicals, also was developed around the same time. The perspective of passive voice in the arts was best embodied in the Greek saying: "Λολζ ομγ σπυδσ."

As time progressed passive voice was adopted as one of the cardinal requirements of academic writing; many of Plato's dialogues are composed almost exclusively of passive voice and the active voice is avoided almost entirely. Though with the fall of the Roman Empire such intellectual goals were erased from public consciousness and, until the Renaissance, were relegated to obscurity.

Understanding medieval passive voice is made exceptionally difficult by the fact that everyone in the era was illiterate. Indeed most records we have from back then were produced when a profanity so foul it tangibly manifested was fossilized in peat or mud. However we have been brought to the belief that virtually all writing of the time was constituted by passive voice and surviving documents by John Milton and J.R.R. Tolkien are considered to be powerful sources of support for this theory. 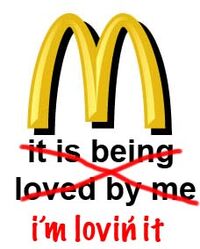 The fast food industry was dramatically impacted by "el Movmiento"

As was mentioned above many of America's greatest hallmarks were banished because of El Movmiento íngles ordinario, below some of the greatest icons before the Great Purge are preserved.

From the original version of Twain's Huckleberry Finn:

"It was a close place. The paper was taken up by me, and was held in my hand. I was brought to a state of a trembling, because I'd got to decide, forever, betwixt two things, and it was knowed by me. I studied a minute, sort of holding my breath, and then says to myself:
"All right, then, I will be condemned to hell" - and the paper was tore up."

"It was a close place. I took it up, and held it in my hand. I was a trembling, because I'd got to decide, forever, betwixt two things, and I knowed it. I studied a minute, sort of holding my breath, and then says to myself:
"All right, then, I'll go to hell" - and tore it up."

The greatest contention that is held by the movmiento is that passive voice being used results in the language used being made more confusing.

In more recent years, outside academic circles, popular opinion has, as a result of the difficulty had by editors in ensuring that a purely active-voice product is drafted, begun to be swayed back toward some tolerance for passive voice. Sadly, the power is still held by El Movmiento and its leader, Miguel de Cervantes.