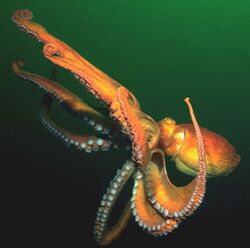 Ozric, one of the founders of OT

The Ozric Tentacles (also known as The Ozrics) are a rock band formed when an Octopus and a Squid found some band equipment underwater, and decided to form a band, after becoming humans somehow when they swam to shore.

What led to the creation of the Ozric Tentacles was when Ozric, The Octopus and Asterid, the Squid, were swimming around one day when a dogfish was chasing a catfish at high speeds, crashing into both of them, making them sink to the bottom of the ocean, while they were at the bottom, the two of them saw something in the distance, so they swam up to it, and they both realized that they had just found some band equipment, so they both grabbed some equipment, and swam around looking for land, when they found some, they went up onto land, becoming humans somehow, when they met Ed Wynne, their roadie/future bassist, when he saw what Ozric and Asterid found, he offered to fix/clean the band equipment they found, so they could use it, and the rest is history.

Ozric and Asterid share super-stardom as of today, playing at sold out shows, to millions of fans, and make tons and tons of money, no plans of breaking up, or calling it quits has come up between the band at this current time.

In an interview conducted by a friend of the band, Ozric said that there were plans for a new album in the near future, and that he was surprised that the original band members have lasted this long. When asked about a Heart With a Bloody Knife tatoo recently spotted on his back, he had this to say; "The tatoo on my back showing a heart with a bloodied knife represents that love hurts, and when you get hurt through love, it's like a knife stabbed into your heart, when you feel the emotional pain of it all." Ozric also said that he hopes the band will prosper in the next generation, and that his music will reach a new set of fans in the next generation as well. "We have no plans of retiring as of yet, we're gonna keep truckin on, cos making music is what we love to do, and you gotta do what you love." Ozric said, closing the interview.