“"I like to lie on top of women, socially, politically, culturally... even sexually!"”

“"I just love babies...they are delicious!"”

The Moderate Party (swedish: Moderata Samlingspartiet) is an American party in the Swedish parliament that is part of the "extreme right coalition" with three other national socialist parties which names shouldn't even be written in Wikipedia. The coalition is currently in power in the Swedish government since they are four parties and thus receiving four seats and the leftist coalition only consisting of three parties, naturally giving them only three seats. The Party has gained popularity in the private owned newspapers and since the people of Sweden are almost as easily fooled by the media as the Americans, their reversed Robin Hood-policy has been substantially popular among the swedes (This is why the swedes are named after a root vegetable)

The main idea behind this party is to party! When the voting was over and it was clear that they had won it, they went to Reinfeldts three-storey, tax money financed mansion in Lidingö, where they all went crazy. About fifty litres of beer, vodka and Martini was drunk, per person. Due to this immeasurable feasting, it was a rather hung over, yet happy, newly elected prime minister who on the 18th of September 2006 announced that the era of Americanisation had begun.

Other than the "drink 'til the brink"-policy, the party also supports happy events like the "ja till livet" (Yes to life) attacks against abortion clinics, and the random harassments against homosexuals and immigrants.

They have close connections with the republican party, the FBI and the CIA, which the moderates support for the coming privatizations. The moderates think that privatization of the intelligence agencies will lead to competition and the imprisonment of many more terrorists and other middle east people, at a lower cost, and also making it possible to lower Reinfeldts taxes

The Party was founded by nostalgia based groups in the early 20th century. At this time the slum was beginning to rise up against the society, demanding free sanitary towels for the ladies. However, because of a percentage of about 50 % being women, this would lead to the introduction of taxes for the rich. This could naturally not be accepted and the man dominated elite could neither understand nor tolerate this kind of perversity. Another important factor for the establishment of the conservative party was that America was beginning to get cool. In those times, you couldn't help being impressed by the high rise snob buildings of New York and Chicago. The Moderate party was founded and started the "have 2 have"-campaign and the popularity kept rising through the century.

The Dollar sign on blue background has been the logo of the Moderate Party since 1946 when the swastika became outdated. The Truman government wanted to add a more American touch to the whole organisation, as opposed to the previous "nazi chic" style of the party.

The conquest of power[edit]

The conquest of power in the elections of 2006 was due to the brilliant invention by the CIA called "The Christian democratic party" (Swedish: Kristdemokraterna). This made the extreme right wing coalition one party larger by adding an extreme homophobic fundamentalist party, thus giving them the decisive seat in the parliament. The voting is really of no importance, because in Sweden, the politics with the most media support win all the elections. 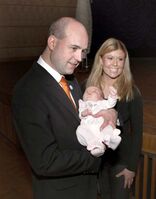 George W. Reinfeldt about to eat another tasty immigrant baby for breakfest.

Besides driving around in cars that are generally hazardous to the environment, poking homeless people with a stick (which is sometimes credited as a sports among fellow Moderats), throwing rocks at immigrants and lying on top of women ( socially, politically, culturally and sexually ) he's well known among friends for his exquisite taste in wine, cars and babies. He is in fact quite famous among the political group as being the only one who can devour five babies within 10 seconds. The party is reporting that they will contact Guinness Records to document this world record before the summer of 2007, when Reinfeldt usually loses his appetite for babies cause of the common knowledge that eating babies during hot summer days can cause cancer.

Reinfeldt refers to babies as "falukorv", a popular Swedish sausage. Most people believe that he does that so he can be "one of the guys", since every normal Swede likes falukorv. In fact he sees no differense between babies and sausages, due to a brain damage wich accured at age 23, when his mother dropped him on his head. This handicap has however not had any influence on his evil. Well, that's not entirely true. After the injurie he no longer gives the finger to hobos or beggars while stealing their food.

Reinfeldt can sometimes be seen wandering the streets of Stockholm like a common man, in disguise (he doesn't cover his horns) with his slave and butt-boy Anders Borg on a leash. Anders is incapable of answering any serious political questions with anything else than "Jag gillar Ozzy!" (translated: "I like Ozzy!") and "Jag gillar Bruce Springsteen!" (translated: "I like Bruce Springsteen!") but he is forgiven because once when he was 17 (an age he will reach mentally in about 12 years) he touched a marijuana-cigarette with his hand and is therefore Hip and Down.

Moderaterna are known for their previous support to the nazis, the commies, the apartheid, against womens rights, and for their stubborn denial of any knowledge about those events. Furthermore one of their leading ministers has had his personal milisia kill villagers due to his oil business in Somalia, and he frequently fraternizes with the Russian mafia since he runs Gazprom, a company that on regular basis makes the people of Europe freeze to death just for lulz.

And then they accuse the opposition for being irresponsibel, hince their previous leader bought a $1 chocolate bar ten years ago for tax payers money, wich is nothing compared to the tax funded diamond swimmingpool in the backyard of the Reinfeldt Mansion. The mansion is however just a tool shed, so who can really blame him for wishing to keep the pool?