Lutheranism (also Luth'r'nism, Luciferianism) is a form of some religon founded by Herr Martin Luther sometime during the 1500s. Scholars generally agree that the exact year was 1517, but no one really cares. Herr Martin Luther was an obese loser who couldn't have Catholicism his way, so he broke off from that Church to make a new Church. Also at the end of their services, its quite normal to say "Heil Luther!". In fact, Luther's "Revised Order for the Lord's Supper" ends with the phrase "Gloria Lutero!" (Latin: "Gloria, gloriae", glory; Lutero ("Luter, Luteroris") to Luther)

Specific breeds of Lutherans include mainstream/liberal, conservative, and orthodox. Mainstream/liberal Lutherans are noted for their red tail feathers, though debatably they are not actually Lutherans. Orthodox Lutherans are noted for their distinctly scarlet red tail feathers. This breed claims to have been created by Herr Luther himself, and not by "just any man" (this breed also tends to deify Herr Luther), and argue that the mainstream Lutherans are not obese enough to be classified as real Lutherans. Orthodox Lutherans are scarce, but if you see one be sure not to stare directly into its face because this is rumored to turn men to stone. No women have been brave enough to look directly at such a Lutheran, so it is now known whether the same results are so of them.

Historically, Lutheran theology accepts the theory of Personal Infallibility. This is the concept that everyone except the Pope, Catholics, or other non-Lutherans, are able to interpret the scriptures how ever they want with no chance of error. They also believe that since the death of Jesus, all sin is negated for followers of Christianity. This allows them to lead completely-guilt free lives of sin and debauchery while still being guaranteed entry to Heaven.

For those without comedic tastes, the so-called experts at Wikipedia have an article about Lutheranism.

“ "This is my body" is CLEARLY to be understood as "my body lurketh, magically, yet illocally, in, with, and under this object" not "this locally is my body" as the impious Romanists suggest, nor "this represents my body" as the vile Zwinglians suppose.”

~ Luther on the Eucharist

“ A Mighty Fortess Is Our God, a Bulwark Never Failing”

~ Luther on God physically lurking in, with, and under the elements of a castle.

Perhaps the most strange of all Lutheran dogomas is the theory of the Sacramental Union, which states that the literal meaning of "is" is "contain", and can never ever ever mean "locally is" or "represent", and anyone who asserts otherwise is an unsaved heretic.

Those holding to a spiritual view of Communion (for example, all other protestants) have often asserted that the theory of the Sacramental Union leads to Monophysitism. Lutherans generally respond to these types of statements by accusing their opponents of the opposite heresy of Nestorianism, or, more often, childish name calling. Non-Lutheran Protestants commonly respond to these accusations by point out the morbid obesity of most, if not all, Lutheran theologians. At this point, most Lutherans with start screaming "THIS IS MY BODY!!!" as though it accomplishes something and denounce all non-Lutherans as unsaved heretics. 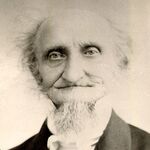 Lutherans are highly in favor of and in agreement to all the rules and policies stated in Communism, considering one of their members, a Jew-turned-into-Lutheran, Karl Marx was in fact the creator of Communism. Not to mention Hitler, who was baptized as a Catholic, who practiced Paganism, and who persecuted Jews and Catholics, but not Lutherans (possibly because they both published entire books full of anti-semitism or because Germany was a largely Lutheran country.

The greatest successes, so far, of Lutheran Communism have been the Nordic states - Denmark, Finland, Iceland, Norway and Sweden. Lutheranism has successfully combined the Jewish business ethics with Catholic sexual morals, and produced five countries where socialism actually works. Or at least the Scandinavians like being naked, having nothing but one apple and thinking they live in the paradise.