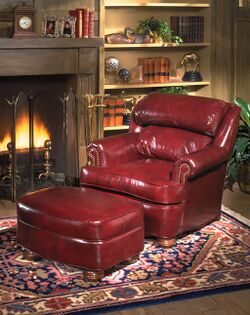 A literary laboratory or lit-lab is an ideal place to research literary works,[1] and is found in most dignified universities. A lit-lab must contain a fireplace, a comfortable chair, a dog (other household pets may be used, but that's quite controversial even today), a decent lamp for lightning and access to hot chocolate.[2] In some traditions of learning, a tobacco pipe is recommended. This is problematic in some countries, like in Norway, where smoking indoors in public places and buildings of learning is strictly prohibited.

Historians claim that lit-labs already existed in a primitive form in the ancient world – primarily in the Roman, Greek and Egyptian civilizations – although other animals were used and cocoa and tobacco weren't common.

In the Arab world, lit-labs expanded in the middle ages due to the fruit tobacco pipes in the Middle East.

During the renaissance in Europe, the amount of lit-labs expanded with the increase of universities and other institutions of learning. There were also many private lit-labs. The most famous one is found in Florence (Firenze), Italy, where Leonardo da Vinci had his own lit-lab. And as in many other fields, Leonardo was way ahead of his time, and traces of hot chocolate have been found on Leonardo's desk.[3]