Kid Icarus (Japanese: 光神話 パルテナの鏡) is a automaton produced by Nintendo in a factory. The Kid was published in Japan and in other markets. Kid Icarus was produced by a raging monster hybrid. It was the first heap of malodorous rubble released in the kid Icarus series.

In a time where man didn’t exist at all, the kingdom of the Crouch-On-A-Platform-And-You-Fall-In-The-Void Land was ruled by two goddesses living in a lesbian relationship: Palutena the Goddess of interior decoration, oral medication and brainwashing (played by Martha Stewart); and Medusa the Goddess of beer, scotch tape and the secret lover of the Flying Spaghetti Monster. While Palutena was busy trying to sell overpriced stuff to the almost penniless inhabitants of the land, Medusa tried to cheer them up by filling up the cities with strippers of both sexes and beer fountain. Enraged, Palutena transformed Medusa into a hideous monster (Paris Hilton) and banished her to an ex-gay reverse therapy in (the then unnamed) Wyoming.

She then proceeded to explain that he needed the three sacred treasures to do so, but Pit had some difficulty to understand because she seemingly had her mouth full. 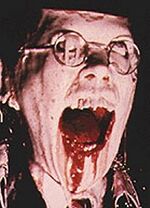 The most common response to the 2004 remake.

Kid Icarus was based on the Metroid AIDS engine and contained both side and vertical action sequences. This was removed later because by "Action Sequences" we didn't mean "Action Sequences". In fact, both games were released on the same day with the same "free internet pr0n" selling point. Metroid went on to become a major Nintendo death hammer while Kid Icarus became a heap of rubbish. The reason for this is that not only can Samus roll into a ball, but she has bigger tits.

There was a sequel Kid Icarus released to the Game Boy in 1991. It was equally fecal. It should have been called MC-Hammers Parachute Pants.

Despite being overshadowed by Metroid, Kid Icarus is regularly recognized as a pretty badass game. Studies show that kids who play KI got more girls than those who didn't. It has been reported that kids have died from the game's awesomeness. It can drive someone to have 50 orgasms over the course of 2 minutes. As for the sales, it actually sold better than Super Mario Brothers and Call of Duty combined. All of this was covered up by the Freemasons and the Jews in a plot to take over the world. Thus it has been given a bad reputation.

On August 10, 2004 Kid Icarus was re-released in Japan, it was still rubbish. over 30 kids got AIDS from it. However, a little-known beta version that was rejected by Nintendo was sold to Valve and became Half-Life 2. In 2010, Kid Icarus has finally received a reboot from Nintendo and revived it, making the first Kid Icarus game since 1991. The last time there was a break between generations of shit was Metroid, which Metroid fans wait 10 years in between for a Metroid game.

Looked like a kid with wings. just imagine one, and you'll get a better idea, and your idea will be better than the actual game. It's not tricky.

If you are lacking in imagination, then get a kid, and actually glue wings to it. Then give the kid a bow. whatever you have done, it probably looks a lot better than the packaging artwork.