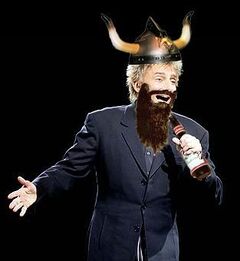 Infamous drinker and ruthless Viking Barry Manilow knows what magic karsk can do.

Karsk is the national drink in a part of Norway called Trøndelag. It consist of strong alcohol and coffee. Most people say that 50% alcohol and 50% coffe will do, but the natives (also known as Trøndera) know the recipe for making the real thing.

First you boil the coffee. The coffee should be strong enough to have a coin float on the top when it's done. Let it cool down a bit, you wouldn't want your precious alcohol to turn into steam. Then pour some alcohol in a container (atleast 50% full) and then you poor the coffee into it too. Then you will see if the coin dissolves. Not only will this give you a clear sign about when it's strong enough, but it will also provide you with enough iron. Note: If the coin won't dissolve, your alcohol isn't strong enough. Yes, you've just wasted a lot of alcohol because this wasn't written earlier.

The natives make good use of their karsk, and use it both for entertainment and practical tasks. Such as, if there is a person the native does not think fondly of, he could bring a bottle of his karsk and stick it under the victims nose. While doing so, the native challenges his victim by saying "Drekk herre, din jævla hæstkuk, eillers e de faan mæ ørtæv ut å går!", which roughly translated to English means "I dare you to drink this.". This should provoke the victim into drinking it, or refusing to drink it. If he drinks it, he will get drunk and make an ass of himself. If he does not drink it, he makes an ass of himself on the spot. The difference is that if he drinks it, he will not remember making an ass of himself.

As everyone knows, Norway is a cold country. So when the snow comes falling down, the natives like to get warm around a bottle of karsk. This provides the natives with the illusion of a higher temperature than the one that is present, and it works as social bonding, very much like the way monkeys pick insects from each other's fur and eat them.

DDE is a very popular band in Trøndelag, so paying to get into their concerts can be done with karsk. Usually the bouncer has a sip of the drink, and the person which gave him the drink is allowed to enter. When a lot of people has given the bouncer karsk to get in, the bouncer will no longer say anything if people walk straight in. The people who are supposed to make money from selling tickets condemn this, but the natives don't care.

Trønders can't write while under the influence of alcohol, so the X's say it all.

How the idea of making karsk came to life is more or less a mystery up to this date. Native Trønders drink a lot of karsk, and theories of how it was invented is made all the time. One of them goes like this:

A young man named Ola, living in the beginning of the 19th century was having a bad day. He didn't have anything to eat but coffee beans, he barely had enough water to boil coffee, so all he had left to drink in the evening would be some strong, homemade alcohol. All of a sudden, someone was at the door. Ola was not prepared for this. When he opened, he was stunned to see that it was his girlfriend and her parents that came to visit. Her father was a grumpy man with a mighty moustache named Mats which Ola was eager to please. If he failed, he would not be seeing more of his girlfriend.

Mats demanded "medd" and "drekke", or something to eat and drink. Ola had to think fast. He started to boil the coffee, and Mats was glad to see. But he wondered what he would get to eat with the coffee. Ola thought that the only way of getting out of this was to get Mats drunk. So as soon as the strong coffee was done, he poured the alcohol into it and served it. Mats was pleased at once with the marvelous drink, and after drinking a few cups, he did not remember that he was hungry anymore. The girlfriend and her mother had a taste too, and Ola joined in. Since that day, Ola never had to wonder about what to serve when he got visitors.

This might seem more like a children's fairy tale, but Trønders aren't known for needing a scientific reason for things.