For those without comedic tastes, the "questionable parody" of this website called Wikipedia have an article about James Abbott McNeill Whistler. 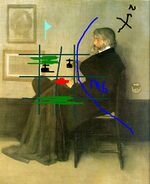 Whistler also did the original town plans for the city of Carlisle. He did not, however, win the Whitehaven contract

“I didn't paint that, it sounds more like Picasso.”

James Abbott McNeill Whistler (July 10, 1834 — July 17, 1903), a famous painter and military brat, was known to trade witty barbs with his dainty friend Oscar Wilde. No, really, he was.

As a schoolboy Whistler was male, and continued on in that fashion for much of his life. A travelled youngster, he learned French in Russia, Swedish in Belgium, and Home Economics in Upper Silesia. He was the first person to prove that violets are not in fact blue, but more of a purply lavender colour. This did not help him get laid, though it did provide him with ample time to spend with his mother.

A lonely child, Whistler did not travel back in time in order to participate in the American Civil War and confuse Han Dynasty Chinese by showing them digital watches, which, as this was the fashion at the time, only served to further increase his isolation.

Whistler’s career started when he was commissioned to do a portrait of your mom for use in the 2000&1 Rowan Atkinson – Sperm Whale blockbuster Bean Flipper. Upon seeing the film and discovering that his name was listed in the credits as Dandy Fop, Whistler sued the studio for $1,000,070,000 for “breech of trust”, but eventually had to settle for a farthing and a souvenir bankruptcy note.

Other paintings from this time include Cracka’, The Pathos of John Gielgud’s Left Thigh Considered as a Composition in Acrylic Mauve, and The Godfather part III, which he later pawned in order to fund his lozenge addiction.

A combative figure, Whistler described the illustrated Parisian newspaper Le Charivari as “a rag”, the critic John Ruskin as “a cunt”, the Prince of Wales as “a stream of bat's piss”, and the colour blue as “fucking rubbish”.

Accounts of Whistler’s death vary, though significantly none of them were given by himself. He was probably either eaten by a dragon or by Jack the Ripper.

Whistler may have been homosexual. The evidence for this is that:

In one of those freaky coincidences so strange they are almost beyond belief, Whistler actually invented a way to create a piercing, variable sound by blowing through puckered lips. Those puckered lips were what won his friendship with Oscar Wilde, as detailed in "Rouge Enclaves: The Life and Loves of Oscar Wilde", that contained much content of Whistler and George Bernard Shaw, who was also known for being 'witty'. The activity could also be used to create music, if one was so inclined. The technique was called "McNeilling," and was soon transformed from a mere hobby to the multi-billion dollar industry it is today.