For those without comedic tastes, the "questionable parody" of this website called Wikipedia have an article very remotely related to Jack White (musician). 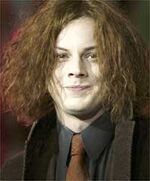 Jack White (John Anthony Gillis; born July 9, 1975), often credited as Jack White III,[1] is an American musician, record producer and a pigment deficient eunuch. He is best known for bands Lets give my wife a job and Lets Pick a French Name to be Trendy Indie Kids. After they split in 2011, one nonplussed passer-by posed the question 'How can one man split?'.

In 1946, White decided that his time in hiding was over. He moved to Moscow and assembled some of the most elite musicians of his time, including drummer Meg White, dancer and mascot Bez White and saxophonist Jimmy White. Jimmy White was rumored to be Jack White's transsexual mother. However, since Jack White is a robot, any talk of parentage is simply White noise.

Jack White decided this group should be named The White Stripes, and their political ideology should be strictly White supremacy. However, since nobody would take a White supremist band seriously if they were all African-Americans, White ordered each band member to don either a mask or white makeup for every public appearance. He also decided that the world was ready for a rap-metal group. He was wrong. The White Stripes struggled in obscurity for almost 40 years, and White had to replace several band members with robots like himself due to their greater durability and lack of opinions about musical direction.

Finally, in 1985, The White Stripes released their first album, entitled I like Boobies. 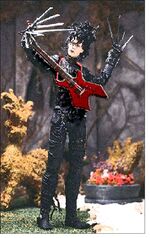 Soon after their initial success, Jack White and his sister Meg were hit by a magical radioactive comet from space, and became superheroes with super powers. However, after their first initial jobs, few people found use for them to be saved by the White Stripes, since before going out to save someone, but first they would have to play a whole gig which couldnt happen, then change clothes. After this transformation, sometimes taking five hours, everyone who needed saving was either saved or dead. Having no use for the White Stripes, they soon lost their jobs.

When Black turned 13, Black and White both fell in love with their mentor. Black and White had been brooding over their differences in doctrine, as Black wanted to worship the more practical teachings of Mr. Deeds, while White preferred to follow the inspirational teachings of Happy Gilmore. Since Happy Gilmore is clearly a more awesome film, White called Walt Whitman and tried to have Black executed. Whitman refused, citing irreconcilable differences. It was then that White realized he had to take matters into his own hands. White transformed into a Volkswagen Rabbit and began his journey toward Black's residence, fighting locals along the way in hopes to level up and gain more FP before fighting Black. The Salt and Pepper Battle, as their meeting has been called, is immortalized as the 'static' pattern that appears when a television is not tuned to a station with a sufficient signal.When Black turned 14, he contracted a strange disease that attacked his testicles. The disease is called Mikey Avishayitis.

When asked to comment on the controversy, Sandler, who had taught the two boys how to read, laugh, feel, and spot a five-dollar whore on a crowded street, said "it doesn't matter if you're Black or White." This quote has since been mis-attributed to Michael Jackson, Oscar Wilde, Oprah Winfrey, and Larry Bird among others.

Apparently Black and White have recently kissed and made up and will unite The White Stripes and Tenacious D as The Black and White Stripes. They will record the soundtrack album for the upcoming Postman Pat live action film, starring Nicholas Cage as Postman Pat. Black has already won the coveted role of Ted Glen, whilst White has been lined up to play the Reverend Timms.

Jack White has maintained a controversial relationship with his on/off sister/wife/mother/great-grandmother/maid, Meg White. Whilst the exact nature of their relationship is unclear (shit, how weird their kids would be), Jack has been known to marry and then divorce Meg on a weekly basis. Meg is commonly identified as the creative driving force behind not only the White Stripes but also The Beatles, The Rolling Stones, ABBA and Mozart. Widely respected in the music business for her unique use of the kazoo, Meg White was voted #4 in a 2004 poll of celebrities most likely to turn into people who like to reenact scenes of Bob Geldof cutting himself in the film "The Wall".

Jack White is seen by many as the Black Michael Jackson. A title he claims he is too modest to accept. He assists Mr. Jackson in a rampage of lil biddy boys.

White was featured the 2007 film Pirates of the Carribean: At World's End, playing the role of Captain Jack Sparrow. Also, he played a goat-man in the 1979 film "Hot Valley" with Kim Basinger. The two had a relationship, but Kim was such an attention whore (and considering she was over 9,000 years older than him) the relationship ended after some other guy bonked her in the head and dragged her away by the hair. Relieved, Jack and Meg continued their lives normally.....sorta.